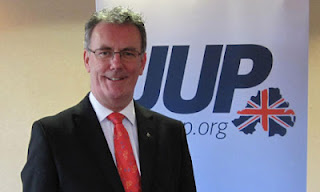 Mike Nesbitt MLA Took over the leadership of the Ulster Unionist Party on 31 March 2012, less than three months ago, and he has had a rough introduction to his new role.  Today he has a short platform piece in the News Letter today (20 June) on the subject of poverty.  In the course of the piece he says:

While we accept that welfare reform is necessary, especially the need to make it simpler and fairer, I am concerned about the scale and pace at which it is moving.

Welfare reform is an initiative of the Coalition government at Westminster but is being driven forward by the Conservative Party, the senior party in the coalition.  It is therefore somewhat incongruous that Mike is now expressing 'concern' about the 'scale and pace at which it is moving'.
Perhaps Mike has forgotten that at the last Westminster election in 2010 he stood as an Ulster Conservative and Unionist - New Force (UCUNF) candidate in Strangford.  He lost out to the DUP candidate Jim Shannon in what was a disastrous election for his party but if he had been elected he would have been sitting today at Westminster taking the Conservative whip and voting for Conservative and Coalition policies, including 'welfare form' and 'welfare reform' at the 'scale and pace' about which he now expresses concern!
Posted by Nelson McCausland MLA at 10:51