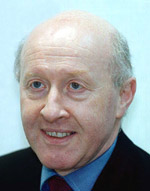 Brian Feeney, a writer, commentator and former SDLP politician, had an interesting article in the Irish News today (20 June) in which he analysed some aspects of Sinn Fein.  In particular he commented on their practice of promoting former IRA members as MLAs, ministers and special advisers and said:

We're talking about MLAs and ministers.  Similar rules seem to apply to Sinn Fein's special advisers, many of who mare also former IRA operators.   That doesn't automatically mean they're stupid.  However some got the job only because of services rendered as long ago as 30 years.  Compare the DUP which selects its special advisers on ability and they often run rings round their Sinn Fein counterparts.

Now Brian Feeney is certainly no fan of the DUP, which makes his assessment all the more significant, especially as he is the author of a standard history of Sinn Fein.

Posted by Nelson McCausland MLA at 11:01