A fashion-conscious rioter at Ardoyne? 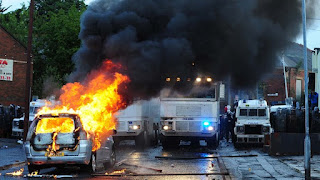 You couldn't make it up!  Christopher McDonald (23) of Wyndham Street, off the Cliftonville Road, has appeared in court charged with riotous assembly at Ardoyne on 12 July.
A police officer told the court that during the riot McDonald went home to change his clothes and then returned to the riot.
I wonder if he was wet from the water-canon and wanted a change of clothing or whether he was attempting to conceal his identity.  Perhaps it is that he was just a fashion-conscious rioter!
Wyndham Street is not in Ardoyne and from his home McDonald would not have seen the Orange parade.  He would not even have heard it.  Nevertheless it seems that he was so offended by what he could neither see nor hear that he went over to Ardoyne, took part in a riot, went home for a change of clothes and then returned to Ardoyne to be offended again.
This comes after the case of another alleged rioter who travelled all the way from Lurgan.  He travelled 20 miles to be offended.  Is there a pattern emerging here?
Neil Montgomery (20) of Elimgrove Street, which is beside Wyndham Street, was also charged with riotous assembly and it will be interesting to see the final tally of rioters.
Posted by Nelson McCausland MLA at 01:49