GARC and the Ardoyne riots (2) 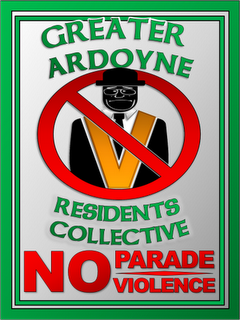 This morning Dee Fennell of the Greater Ardoyne Residents Collective (GARC) was on the Nolan Show.  I also took part in the discussion but the contribution by Fennell was surreal.  He exposed in a remarkable way the naked sectarianism and bigotry of GARC and those it represents.
Fennell said that the DUP has refused to speak to nationalists residents in Ardoyne.  I pointed out that he was wrong and that we had met with  Crumlin Ardoyne Residents Association(CARA) to discuss parades.  Initially it was the Ardoyne Parades Dialogus Group which claimed to represent nationalist residents in Ardoyne, then it was replaced by CARA and now there are two nationalist groups - CARA, which has connections to Sinn Fein, and GARC, which is organised by dissident republicans.
He then asked would we meet with GARC as he was a North Belfast constituent.  However I pointed out that there seemed to be little point in talking to GARC.  They have a stated position of no loyal order parades at all on the Crumlin Road.  What is the point of meeting with those who are so intolerant that they want to 'no Orange feet' on the Crumlin Road?  It is impossible to reach an accommodation with those who are so intransigent and intolerant.

Down through the years the loyal orders have reduced the number of parades and have even altered the times of parades to accommodate the concerns raised by nationalists but to date there has been no reciprocation.
Posted by Nelson McCausland MLA at 07:24