GARC and the Ardoyne riots (3) 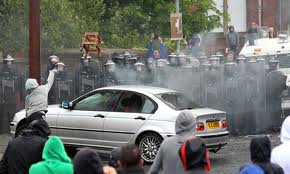 The night of 12 July at Ardoyne was another night of appalling republican violence.
I spent much of the afternoon and evening in Twaddell Avenue and then around 10.00pm, I drove up the Oldpark Road to get to my office.  At the Marrowbone area there is a good view down over the whole of Ardoyne and I stopped to look.  Most of Ardoyne was quiet but the top section of Brompton Park was a scene of mayhem.
Later on the news reported that around 10 shots had been fired by dissident republican gunmen.  They were almost certainly firing at police officers and this was attempted murder.  Policemen are the prime target for dissident republican killers.  It comes as no surprise that dissidents used guns because they have been using guns in Ardoyne for some time, including punishment shootings of local people.  Getting the guns out of Ardoyne must be a priority for the PSNI.
Year on year republicans turn to violence to get their way - petrol bombers, rioters and gunmen turn out to assert the republican claim that the Crumlin Road is their road and that the loyal orders have no right to use it.

In spite of the evidence of burning vehicles, petrol bombs and gunfire in nationalist Ardoyne, some elements in the media have implied that loyalists were as much to blame as republicans.  Nothing could be further from the truth and the truth must be told.

During the course of the evening frustration built up amongst some of the loyalists who were present and several people were arrested by the PSNI as a result of scuffles with the police but not a single shot was fired by loyalists and not a single petrol bomb was thrown.


Finally, we should not forget that the violence which was initiated by republicans is not only about a sectarian hatred of Orangmen, it is also about creating a context in which dissident republican gunmen can try to murder policemen, as they did again this year.
Posted by Nelson McCausland MLA at 00:59