JJ Magee and the YCV 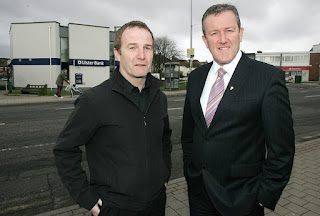 J J Magee and Conor Murphy at Glengormley
At the 2011 Assembly elections Sinn Fein ran three candidates in North Belfast, Gerry Kelly, Caral ni Chuilin and J J Magee.  Kelly and Caral ni Chuilin, the two sitting Sinn Fein members, were the lead candidates and both were elected.  Magee fell far short with just 3% of the vote and was not elected.  Meanwhile the DUP topped the poll and was the largest party in North Belfast with 37.1% of the first preference votes and three seats. 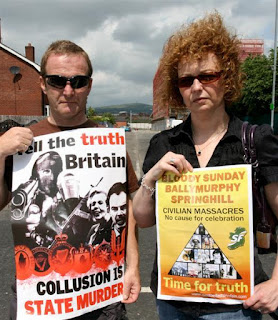 J J Magee and Caral ni Chuilin
Thereafter Magee disappeared from the news but he has emerged in the last few days as a Sinn Fein cameraman and propagandist.  So what do we know about J J Magee.  According to the description used when he ran as a candidate for Sinn Fein:

North Belfast businessman JJ Magee is a resident of Castle Ward where he has played a leading role as a Sinn Fein activist. He is a human rights campaigner involved [on] the boards of Relatives for Justice and the Ashton Centre.  His work in North Belfast ranges from engagement with the Unionist community to support for the families of Republican prisoners.  JJ has represented Sinn Fein and human rights organisations in Cuba and Palestine as well as throughout Ireland. He is dedicated and a hard worker with a lot of knowledge and experience in the area of conflict transformation.

In other words he is a prominent Irish republican and a leading member of Sinn Fein.

Now back to the role of J J Magee on the Twelfth.  According to media reports he was standing with a group of nationalists and republicans at Carrick Hill watching the parade as it made its way down Clifton Street and into Donegall Street.  He was watching the parade and scrutinising it and at one point left the nationalist group and walked sperhaps 50 to 100 yards down towards the parade to get very close to one of the bands and film it playing.  That short film clip was posted on a New Lodge website and has become the subject of much media coverage, including two full pages in today's Irish News.
The background to this episode is that there is a time when the Twelfth parade halts, to allow the County Grand Lodge officers at the front of the parade to lay a wreath at the Cenotaph at the City Hall.  The ceremony normally takes about 10 to 15 minutes and during that time lodges and bands stop at the point they have reached and wait for the parade to resume.
During that delay two things happened.  The first was that a female republican in the crowd at Carrick Hill shouted IRA slogans in the direction of the Orangemen who were standing at the bottom of Clifton Street and the top of Donegall Street.

Secondly and separately the Young Conway Volunteers Flute Band from the Shankill Road area were in Donegall Street, near St Patrick's Roman Catholic Church.  At the time, as the youtube footage shows, the doors of the chapel were closed and the gates in front of the building were closed.
A report in the Belfast Telegraph (13 July) stated that 'the band stopped to play loyalist tunes outside a Catholic church in Belfast'.  This was in fact untrue.  The band stopped because the parade stopped and during the time they are stationary many bands will perform to entertain spectators.  Moreover this sort of impromptu performance will often involve the band members walking round in a circle as they play.  They are of course marching bands and when a band is stationary the only way the members can march is round in a circle or occasionally a figure of eight.  Later on, as the parade made its way up the Lisburn Road, there was another break and again many bands provided a similar impromptu performance for spectators.
The Belfast Telegraph report was also erroneous in that it named the band as the Young Citizen Volunteers.  In fact the name of the band is Young Conway Volunteers, which I believe is a reference to Conway Street in the Shankill area.
The third error in the Telegraph report was that the band members wore 'Young Citizen Volunteer uniforms'.  They were actually wearing navy band uniforms, with the words Young Conway Volunteers on them, and white caps.  The historic unforms of the Young Citizen Volunteers were grey.
The fourth error in the Telegraph report was the inclusion of a statement by an unnnamed source who claimed that 'the band moved from where they were standing to play outside the church'.  The band could not have moved as there were lodges in front of them and behind them.  They stopped when the parade stopped and they played where they stopped.
The fifth error in the Telegraph was the implication that they only played 'loyalist tunes'.  During those fifteen minutes or so the band played a range of tunes, including Penny Arcade, a pop song which was written by English singer songwriter Sam King and was a hit for Roy Orbison back in 1969.  Glasgow Rangers fans made the Sam King version a hit again last year in an effort to raise money for the Erskine Hospital, which helps wounded servicemen and veterans.  For years the IRA murdered British soldiers but that doesn't make Penny Arcade a loyalist song.
The band also played the tune of Noreen Bawn, which has been recorded by Dominic Kirwan, Daniel O'Donnell and a number of other Irish singers.  It would be hard to describe either Penny Arcade or Noreen Bawn as 'loyalist' tunes.  I have certainly never thought of Daniel O'Donnell and Dominic Kirwan as likely to sing either 'loyalist' or 'anti-Catholic' songs!

Five factual errors in a short report but such is the standard of journalism in Ulster today.
The BBC also reported the incident and according to the BBC website: 'A loyalist band has been filmed stopping to play loyalist tunes outside a Catholic church in north Belfast'.  Note the term 'loyalist tunes'.  Meanwhile on Radio Ulster Wendy Austin said that the band played 'anti-Catholic songs'.  Here again we see a repetition of some of the errors in the Belfast Telegraph.

The band played for fifteen minutes and of all the tunes that were played during that time only one has been criticised, named the old Beach Boys tune, Sloop John B, the words of which have been altered by some Scottish loyalists to refer to Irish immigration into Scotland after the 19th century Famine.
It can be argued that the band was naive or thoughless or unwise but this whole affair has been exploted by Sinn Fein in an opportunistic attempt to divert attention away from the sectarian behaviour of Irish nationalists at Carrick Hill and even more so from the extreme violence of republican hooligans and dissident republican gunmen at Ardoyne.  The Sinn Fein propaganda machine went into action and an unquestioning media pumped out a garbled and erroneous version of events.
Finally the video clip by J J Magee was posted on the website www.thenewlodge.com.  It is worth checking that out, as presumably journalists in the BBC and other media did.  The clip is prefaced by the following introduction:

Orange Parade at the New Lodge area.  We let them march on our roads, between 2 Catholic areas and this is how we are thanked.

Yet the sectarian introduction to the video clip, which sets the context for the clip, was never mentioned in the media - another example of shoddy and superficial reporting by the Belfast Telegraph and other media.
Perhaps now that it has been pointed out the media will go back to J J Magee and Sinn Fein and ask them about this sectarian perspective.

Quite frankly the media simply took the Sinn Fein propaganda and swallowed it hook, line and sinker - no questions, no challenge, no investigation.
The County Grand Lodge of Belfast has stated that it will review all parades and look at all the facts over the coming weeks and the Irish News concluded its lengthy report by saying that: 'It is understood that while it is likely that there was no breach of a Parades Commission determination the action may have contravened the voluntary code of conduct of bands playing outside a place of worship.'

The entire parade will be reviewed by a number of bodies and for that reason I will hold my counsel on the matter but it does confirm two things about the media in Ulster:
1. the standard of journalism, especially as regards factual accuracy and context, is very disappointing
2. the perspective of the media can be quite alarming - the issue has been about one band and one tune but one newspaper editor deemed the story of such a scale of importance as to devote his entire front page and another page inside to it.  On that basis the dissident republican violence should have merited an entire issue of the newspaper but that was certainly not the case.
Posted by Nelson McCausland MLA at 13:44