Coatbridge and the Ulster Covenant 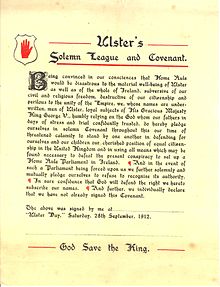 Yesterday morning I was involved in a workshop in with some local people, historians and consultants to develop aspects of the Gateway to North Belfast.  This is Donegall Street, Clifton Street and Crumlin Road up to the junction with Oldpark Road.  It links the Cathedral Quarter and the area around the Crumlin Road Gaol, both of which have an important role to play in cultural tourism, and also acts as the main gateway for people coming into North Belfast, including tourists.
The consultants talked about a previous piece of work they had done in Coatbridge in Scotland and said this about Coatbridge:

Coatbridge was once Scotland's iron capital.  Flames from fifty blast furnaces made the night sky so bright that people could read newspapers at midnight.

My ears picked up when I jeard the name Coatbridge because my mother was born there and I used to visit it with my parents when I was a child.  We still had relatives there.  At one time quite a number of Ulster people worked in Coatbridge and many settled there.
I also recalled that my grandfather signed the Ulster Covenant in Coatbridge.  His name was George Bicker and he was from Poyntzpass in county Armagh but he was living and working at the time in Coatbridge and was the first person to sign in Coatbridge.  The signing agent in Coatbridge was James Smith and 880 men signed the Covenant there, a reflection of the strong Ulster presence in the town.  The location was given on all the sheets as Coatbridge, there was no mention of a hall or building and there was only one signing agent, so presumably there was only one signing place in the town.
My grandfather's name was Bicker but for some reason he signed the sheet as George Bickers, as did one other member of the family, while the others signed as Bicker.  Four members of the Bicker family signed the Covenant in the Presbyterian church in Poyntzpass and another signed in Portadown town Hall, while a Mary Bicker signed the Women's Declaration in the Baptist hall in Poyntzpass.
A small thing, such as the mention of a place or a person, can easily cause our thoughts to wander or our minds to make connections and yesterday was no exception.
Posted by Nelson McCausland MLA at 01:12