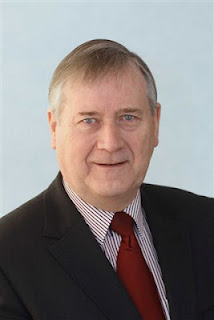 On Wednesday afternoon William Humphrey and I went to the Parades Commission in relation to the Belfast Grand Black Chapter parade in Belfast on the last Saturday in August.  We were there for well over an hour and once again it was thoroughly distasteful meeting.

Two of the Commission members were not there and those present were the chairman Peter Osborne, Douglas Bain, Rev Brian Kennaway, Robin Percival and Delia Close.
At times such meetings can become surreal and yesterday was no exception.
For example, the commissioners raised an issue about bands playing loyalist music when they are outside or passing by a Roman Catholic church and I pointed out the inconsistency of the Parades Commission.  For example, every Easter the Vol Sean McIlvenna Republican Flute Band plays when it is going past two Protestant churches on the Whitewell Road in North Belfast.  It passes St Ninian's parish church and Greencastle Methodist Church and continues to play republican tunes while it is passing them.  The commission has observers on the ground at that parade and yet it has never sought to act against the band for its behaviour while passing Protestant churches.

On the other hand some loyalist bands have been banned from playing loyalist music when passing Roman Catholic churches. 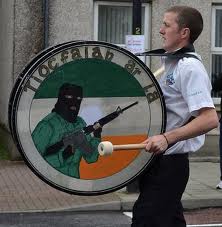 I also pointed out that some republican bands with masked IRA gunmen painted on their drums carry those drums past Protestant churches when they parade in a number of towns and villages, yet nothing is said about these matters year on year.  The issue is one of inconsistent and partisan decisions.
At that point Brian Kennaway asked us if we knew the difference between the Protestant and Roman Catholic view of a church building.  My colleague replied that unlike Brian Kennaway he did not have a degree in theology and Brian replied that he did not have a degree in theology either.  However as a Presbyterian minister he certainly has received theological training.  In any case Brian explained to us that Protestants, other than Anglo-Catholics, view a church building very much as just a meeting-house, whereas for Roman Catholics there is a special sanctity about the building, whether open or closed, and it is also the place where the sacrament is reserved.

These are points with which I am very familiar but I listened to him.  Brian then suggested that parades should take account of the Roman Catholic view of church buildings and the sensitivities  of nationalists, even if a building is closed.

That is a brief paraphrase of this part of the discussion and I hope I have not misrepresented the substance of what Brian said.  The chairman intervened to move the discussion on and we left this rather esoteric exchange but I reflected on it afterwards and it is a good illustration of the perversity of the Parades Commission.

Surely if Roman Catholics have a particular sensitivity about the sanctity of church buildings, even when closed, then the Whitewell republicans, who will generally be from the Roman Catholic community, should have even more reason to refrain from playing republican tunes outside Protestant churches.  They certainly cannot plead ignorance.  The same would also be true for republican bands in villages such as Dungiven or Dunloy.

And of course that brings me back to the basic point I was trying to make to the commissioners - the inconsistency of their determinations.

My second point is that this is a particularly perverse commission and some of the questions I have been asked have been completely bizarre.  At a previous meeting, when it was suggested that a band might play only hymns during part of a parade, Brian Kennaway initiated a discussion about different styles of church music and the tempo and volume of the hymns that might be played by the band.  Is that really the sort of thing that the commissioners are paid to discuss?  It is almost as if Brian sees himself as a theological adviser or is trying to impress people with his theological knowledge.  Having known Brian over many years I suspect it is the latter but I can only speculate.

On the Twelfth in Ardoyne, rioters burned a car and attacked the police while a dissident republican gunman attempted to murder police officers.  Moreover the rioters were part of a republican parade and one of the republican stewards has been charged with rioting.  All that and yet Brian Kennaway wants to discuss one of the finer points of theology.

Most people will never have met the Parades Commission and in that regard they are fortunate.  However this post and the next are intended to give some idea of just how disfunctional this body actually is.