The republican split in Rasharkin

All is not well in the republican community in Rasharkin and amongst republican activists there is a split similar to that in Ardoyne, where you have the Crumlin Ardoyne Residents Association (CARA) and Greater Ardoyne Residents Collective (GARC).  CARA has links to Sinn Fein and GARC is run by the dissidents, including Martin Og Meehan. 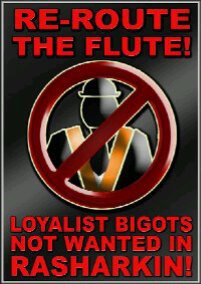 Meanwhile in Rasharkin there is a Rasharkin Residents Association (RRA), linked to Sinn Fein, and a Rasharkin Residents Collective (RRC), which appears to be run by dissident republicans.  For some reason or other  dissident republicans seem to prefer the word collective to association.  I suspect they think it sounds more left-wing and radical!
The RRC has its own Facebook page, which was started on 29 June, and it reeks of bitterness and bigotry.  However it provides a lot of interesting information about both strands of republicanism.
As regards RRC, they organised a Poc Fada in Rasharkin tonight at the same time as the Ballymaconnolly band parade.  This required republicans to arrive in Rasharkin with a hurley stick.  The RRC Facebook page says: 'To all attending our Road Hurling Event Tomorrow Night, don't forget to bring your hurls and sliotars with you!'

Inviting people to come from 'North and South' with hurley sticks and to come in large numbers, at the same time as the band parade, is hardly conducive to a peaceful evening.  It is clear what these people have in mind and it is clear that it would be impossible to reach an accommodation with them.
The RRC Facebook page exposes their hatred of Sinn Fein, whom they refer to as Shame Fein and criticise time after time.  They also repost an article from the Irish Law and Democracy Committee blog in which the ILDC argues its case against Sean 'Spike' Murray of Sinn Fein.

However they are obviously very close to the 'local 1916 society' and state that 'Rasharkin Residents Collective and the local 1916 society are the cutting edge of the resistance which has stopped Orange Feed (sic) in Sunnyside.  Other community groups and Sinn Fein are practicing (sic) the art of compromise with Parades Commission and  PSNI/RUC whilst their neighbours are attacked.'

The antipathy between mainstream republicans and dissident republicans is plain to see and it seems that in Rasharkin the two groups are openly fighting each other.  They have a burnt out car video on their page and claim that this was done by loyalists but I have been told by a local person that this was the result of fighting between the two republican groups on Tuesday evening.  The PSNI will of course be investigating the episode and time will tell but we do know that in North Belfast there have been a number of attacks on vehicles and property belonging to members of Sinn Fein and the finger has been pointed at dissident elements within the republican community.
The venom that RRC feel towards RRA is very obvious in the following extract from the RRC FB page. 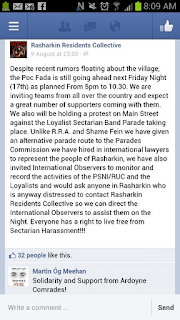 It is also interesting to see the words of support from Martin Og Meehan in Ardoyne - 'Solidarity and support from Ardoyne Comrades!'  Meehan is of course a leading figure in the Republican Network for Unity (RNU) in Ardoyne and a prominent dissident republican.

When Sinn Fein started their campaign to demonise and attack the Loyal Orders they created a monster and it is one that they can no longer control.  Now it is a monster that not only attacks the Orange Order and the bands - it is a monster that is turning on them as well.
Meanwhile the decision of the Parades Commission to restrict the Ballymaconnolly band parade in Rasharkin tonight was another bad determination and simply rewarded the republican extremists.  I would however congratulate my colleagues in North Aantrim, Ian Paisley MP, Mervyn Storey MLA and Cllr John Finlay for supporting the band.  Mervyn in particular has worked closely with the band over many years and I know that the support of their DUP representatives is much appreciated.
Posted by Nelson McCausland MLA at 14:37