There is merit in pursuing the point raised by Rev Brian Kennaway at our meeting with the Parades Commission about bands playing outside churches and asking what the implications might be for republican parades, both those organised by Sinn Fein and their associates and those organised by dissident republican groups.
Republican parades are often organised in rural villages such as Dungiven and in the centre of many of these villages there are Protestant as well as Roman Catholic churches. 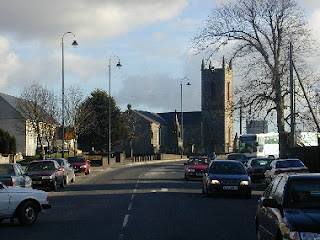 Dungiven is a village on the main A6 road between Belfast and Londonderry and the Church of Ireland parish church is on the main street.  It was built in 1816 and the present church hall, which is beside it, was opened in May 1996.  Just a few weeks later, in July 1996, the hall was burned down in a sectarian arson attack but it was rebuilt and opened in September 1997.
Over the years the village has played host to  many republican parades and the most recent march, as recorded on the Parades Commission website, was on Sunday 5 August.  It was the 2012 National Hunger Strike Commemoration and Dungiven was probably chosen as it was the birthplace of Kevin Lynch, an INLA hunger striker who died in 1981
The march started at 1.00 pm and proceeded from Foreglen Road along Main Street and Curragh Road to the field.  There were 26 republican bands taking part and 15,000 participants were expected to attend the commemoration.
A simple check with google-map shows that the Sinn Fein parade went past the Church of Ireland.  So what was this Sinn Fein march like and what were the 26 bands like as they marched past a Protestant church?
According to the report in the Londonderry Sentinel (10 August):

A crowd estimated to be in excess of ten thousand took part in the march through the County Londonderry town on Saturday afternoon.  Marchers and bands from all over Ireland, Scotland and Liverpool were in attendance alongside Sinn Fein members such as Stormont Minister Michelle O'Neill and former East Londonderry MLA Francie Brolly.

Martin McGuinness was there as well as Martina Anderson MEP and other prominent Sinn Fein members such as Cathal O hOisin MLA.  The Sinn Fein event also included several people dressed as IRA volunteers and carrying replica AK-47 assault rifles.
There is an official Sinn Fein account of the event on youtube, which runs to 19 minutes, and there are a number of other videos of the event on youtube.  I haven't yet had time to look at all of these but even the official Sinn Fein account contains shots of two Sinn Fein cumann banners with IRA men and assault rifles.  Moreover several of the bands contain specific references to the Provisional IRA in that they are named after members of that organisation, such as Volunteer Billy Reid and Volunteer Sean McIlvenna.

Brian Kennaway told us that Roman Catholics have a particular view about the sanctity and significance of church buildings, even if they are empty, closed up and locked.  Then surely many of those organising and taking part in the Sinn Fein hunger strike commemoration would hold that view.  In that case they cannot plead ignorance when they march past a Protestant church with bands playing republican tunes and with depictions of IRA weapons and references to IRA terrorists on the Sinn Fein cumman banners and on the sides of some of the bass drums..

I will be writing to the Parades Commission about this and asking whether they have ever investigated such behaviour by republican groups and republican bands outside a Protestant church.

I will also be raising with the BBC their coverage, or lack of coverage, of what happened in Dungiven.

Posted by Nelson McCausland MLA at 23:27