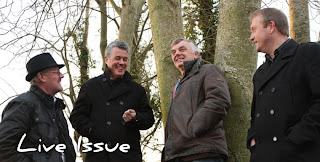 Several years ago I attended a gospel concert in the Theatre at the Mill in Mossley.  The singers included Live Issue, a country gospel group from county Armagh, and other local singers as well as George Hamilton IV from America.  It was a well attended and very successful evening and indeed country gospel and southern gospel msuic is very popular in Northern Ireland.
Later I posted on this blog about the concert and noted the absence of gospel music from the various arts festival in Northern Ireland.  I referred specifically to the Belfast Festival at Queen's, which is our premier arts festival.  It includes many types of music in the programme and yet Christian gospel music is ignored.  Subsequently I came in for some criticism from those who thought that this was inappropriate.
I thought that nothing had come of my appeal but the point was noted by the members of Live Issue and they decided that if gospel music was excluded from other festivals they would organise a gospel music festival themselves.  It is known as Gospel Fest and the third festival took place this weekend near Donaghcloney.
There was a packed programme and the compere was Alastair McDonald, a Scottish singer-songwriter who has had many guest spots on radio and television and who co-hosted the television programme Songs of Scotland.
On the opening night the programme included award-winning local singer Janece McCreanor and Warren Smyth, a singer and Downtown Radio presenter, along with Live Issue themselves and the Michael Harcus band from the Orkney Islands.
Local singers Karla Gregg from Magherafelt and Simple Faith from Belfast were singing on Saturday night as well as the Michael Harcus Band and Robirohi, a gospel bluegrass group from Tallinn in Estonia.  We had more than three hours of great gospel music and a full house.
This afternoon Syd Little, who is best known as one half of the comedy duo Little & Large was on stage, singing and speaking about his faith.  The final session was tonight with Paul Irwin, Kathryn Mitchell, the very popular Gardiner Family, Live Issue and the Michael Harcus Band.
Live Issue have performed at the Grand Ole Opry in Nashville and have shared the stage with singers such as Ricky Skaggs, Reba McIntyre and Joanne Cash.  Their music is of a very high standard and the other local singers are of a very high standard as well.  This was a superb festival with three nights of great gospel music.
Gospel Fest takes place in a 1,000 seater marquee and it was filled on  every one of the three nights.  There is the proof of the popularity of gospel music in Northern Ireland.  Not every festival will achieve that level of success.
The cost of the event is is £15,000 and it receives no public funding.  Entrance is free and some of the cost is covered by advertising in the festival programme with most of the rest coming through a free-will offering.
The organisation of Gospel Fest is carried out mainly by a voluntary committee with no paid staff and there is a strong team of volunteers who undertake the practical arrangements in relation to the tent, the seating, the car parking, the transport, the toilets and the catering and all the other aspects of a festival.  We have a great tradition of volunteering in Ulster and this is another example of that tradition.
On Saturday night we were leaving the tent around 11.30 and as I made my way back to Belfast I thought again of the opportunities that have been missed by other festivals, including the Belfast Festival at Queens.

I also thought of the first United Kingdom City of Culture, which will come to Londonderry next year.  There is a strong interest in gospel music in the North West and the Radio Foyle programme Rejoice, presented by James McClelland on Sunday afternoons, is enjoyed by many people across the province.  There must surely be a place for gospel music at some point in the Year of Culture.
Posted by Nelson McCausland MLA at 16:06