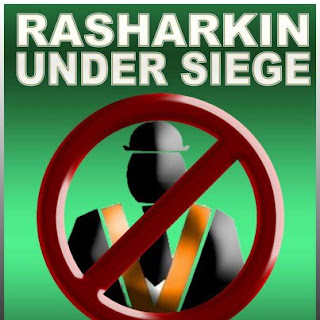 This morning my blog featured as the lead article on page 1 of the Irish News with a follow up article on page 6.  The banner headline on page 1 was Residents group may sue DUP minister after 'dissidents' blog claim.  Alongside the page 1 article is a photograph of RRC chairman Sean Hanna, who is described as a former member of Sinn Fein, and RRC secretary Odhran Darragh.
Some republicans seem very offended when the term 'dissident' is applied to them.  Martin Og Meehan of the Greater Ardoyne Residents Collective (GARC) has already objected when I described him as a 'dissident'.  Now his friends in Rasharkin are also offended by my use of the term.
Well that may be but it is a perfectly legitimate description.  According to a dictionary a 'dissident' is 'a person who opposes a prevailing or official view'.  In this case we have people who oppose mainstream republicanism and they are commonly described in the media as 'dissidents'.  There are many strands of dissident and they are divided into various small groups, but the term dissident is generally employed to indicate that they disagree with the stance of mainstream or Sinn Fein republicanism.
As regards the Rasharkin Residents Collective they are clearly in disagreement with Sinn Fein, whom they ridicule as 'Shame Fein' and accuse of 'abandoning the people of Rasharkin'.  Moreover there were separate republican protests in Rasharkin on Friday night, one organised by the Rasharkin Residents Association and the other by the Rasharkin Residents Collective.
The Irish News not only reported the matter but it embellished it.  The second paragraph of the article by journalist Connla Young, on page 1 of the newspaper, states:

Members of the group in Rasharkin, Co Antrim, are taking legal advice after Nelson McCausland claimed that they were linked to illegal paramilitary republican groups.

It is noticeable that there are no quotation marks here and indeed I did not say that at all.  In my post there was no mention of 'illegal paramilitary republican groups'.  That is an invention of the journalist.  The fact is that there are some dissident republicans who are linked to paramilitary groups and who argue for an ongoing paramilitary campaign.  At the same time there are other dissident republicans who argue that this is not the time for a paramilitary campaign.
It is clear that both residents groups in Rasharkin are republican and the chairman of the RRC is a former member of Sinn Fein.  It is also clear that those who run the RRC dissent from and oppose Sinn Fein, therefore it is perfectly proper to say that they are run by dissident republicans.   To suggest that they might sue me over my use of the term 'dissident' is just empty talk.
Posted by Nelson McCausland MLA at 16:38