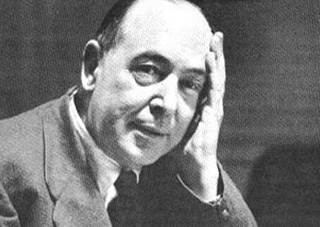 C S Lewis
Yesterday a number of important letters written by Belfast author C S Lewis were handed over to Queen's University by Rev Dr Richard Acworth and his daughter, a graduate of Queen's.
The eleven letters were written between 1944 and 1960 to Dr Acworth's father, Captain Bernard Acworth, who was a friend of Lewis and was also one of the founders of the Evolution Protest Movement.  The EPM was formed in 1932 and the first president was Sir John Ambrose Fleming (1849-1945) a prominent physicist who invented the first thermionic valve in 1903.  He also discovered the left hand rule for electric motors. 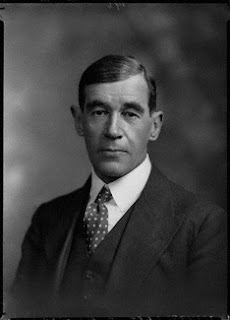 At the handing-over of the letters in the C S Lewis reading room, in the university's McClay Library, Dr Acworth spoke about how his father had founded the EPM in the 1930s and was dedicated to opposing the teaching of evolution as scientific fact.  Acworth corresponded with Lewis, arguing that evolution was incompatible with the Bible.
According to Dr Acworth, 'My father became friendly with Lewis during the 1940s.  In his published works, C S Lewis infrequently addressed the subject of creation and evolution and when he did he usually endorsed some version of theistic evolution. These letters are fascinating because they reveal that, during the last years of his life, Lewis was growing increasingly uncomfortable with the claims being made for organic evolution.  Originally Lewis was more or less agnostic on that subject but it seems in the course of the correspondence he gradually became much more to my father's way of thinking.'
The correspondence also reveals how, in 1951, Lewis declined to write a preface to one of Captain Acworth's books opposing evolution.  'When a man has become a popular apologist he must watch his step.  Everyone is on the look out for things that might discredit him,' he wrote.
This correspondence is especially interesting in that Lewis seems to have become 'increasingly uncomfortable with the claims made for organic evolution' and that is a new insight into his thinking.

It is also a reminder of one of the early societies formed to oppose the theory of evolution and of its first president Sir John Ambrose Fleming FRS.  Sir Cecil Wakeley, president of the Royal College of Surgeons, was also president of the EPM from 1962 to 1979 and Professor Verna Wright, professor of rheumatology at Leeds University, was president from1979 to 1997.

It is worth recalling that such notable scientific figures were able to promote their views on evolution without the level of public ridicule that is directed towards creationists today.  It certainly illustrates the fact that a much more aggressive and abrasive atheism has emerged in recent years with figures like Richard Dawkins.

Posted by Nelson McCausland MLA at 15:20