The GAA and another IRA comemoration 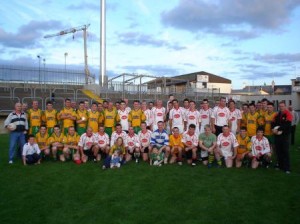 The memorial match in 2008
The GAA has abandoned some of its exclusive rules and has come quite a way but it still has some way to go to reach the vision of a 'shared future'.
Last week my DUP colleague from Mid-Ulster, Ian McCrea MLA, highlighted the 'Giants will Clash' Harvey and McGlynn memorial cup which was a GAA match at the MacCumhaill Park in Ballybofey.  The match was between a team from GAA clubs in county Tyrone and a county Donegal GAA select side.
The GAA match commemorates two IRA men, Seamus Harvey and Gerard McGlynn, who died when a bomb they were carrying exploded prematurely on 10 August 1973.  They were about 200 yards from the customs post at Kilclean when the bomb exploded killing the two IRA men.  Gerard McGlynn (18) was from Castlederg and Seamus Harvey (22) was also from Castlederg but had been on the run and living in Donegal.  A few weks before his death Harvey had been in court in Dublin charged with IRA membership and possession of weapons.
The GAA ground in Ballybofey is used by the Sean MacCumhaills GAA club but it is also the Donegal county ground and it is named after Sean McCool, a prominent republican who was chief of staff of the IRA for a short period in 1942.  This was during the 2nd World War, at a time when the IRA were collaborating with the Nazis, and McCool developed plans to get Nazi agent Sergeant Gunther Schuetz out of Ireland and back to Germany with a shopping list of weapons for the IRA.
The Ulster Council of the GAA has denied all knowledge of the event and Donegal county board vice-chairman Charlie Cannon said, 'I checked it out with the county's vice-secretary, we have no game and no application to play a game with Donegall GAA.'  Ulster Council public relations officer Oliver Galligan also said he knew nothing about the match.
All of this is very surprising as this is an annual event and has taken place in the county ground over a number of years.  I am not sure when the event started but the Donegal Sinn Fein website has photographs from the 2008 game.  It is therefore hard to believe that the Donegal GAA board do not know anything about this annual competition in their county ground!
The GAA says that it is reaching out to other communities but events such as this create a chill factor for those communities.  The rule book of the GAA is explicitly nationalist and it exludes unionists from joining the organisation.  But even if that were changed how could the GAA hope to attract unionist support while it hosts events commemorating republican terrorists.
Next year is the 40th anniversary of the deaths of the two IRA men andas such it will undoubtedly receive more attention.  With twelve months to go perhaps the Donegal GAA will get their act together and put an end to this abuse of what portrays itself as an inclusive sport.

It has now been reported that the Ulster Council of the GAA is investigating the event so we will await with interest the outcome of the investigation and what action they propose to take.
Posted by Nelson McCausland MLA at 06:19