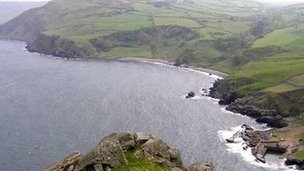 Wayne Soutter, who was born in South Africa but now lives in London, has completed the ten mile swin from the Mull of Kintyre in Scotland to Torr Head at Ballycastle.  It took him twelve hours to complete the task and he is believed to be the first person to ever swim between the two points.
This is a dangerous stretch of water and Wayne also faced the problems of cold water and large jellyfish.  He says that he encountered about one jellyfish a minutes.
It is therefore a remarkable achievement and also a reminder of just how close Ulster is to Scotland.  Moreover, with the surname Soutter, Wayne is a man with Scottish ancestry.  The surname comes from the Scots word for a cobbler or shoemaker and is recorded in Dumfries in the early 13th century.
Posted by Nelson McCausland MLA at 03:25