Bobby Sands and the bunscoil 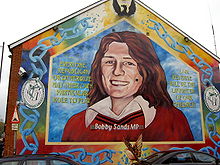 Jim Gibney is a prominent member of Sinn Fein and a columnist in the Irish News.  At one time he was Sinn Fein's national organiser and he spent six years in prison for possession with intent, wounding, and IRA membership.
Yesterday (25 October) he turned his attention to Scoil na Fuiseoige, an Irish-medium primary school in West Belfast.  He wrote about a visit to the Irish-medium school and reminded us of the significance of the name of the school:

A stone's throw from where I stood last Friday, some 35 years ago, a small group of Irish-language pioneers met in a portable building.  They had a vision.
This was the gathering - the oak tree's acorn - and in this group was Bobby Sands in organisation mode, enjoying a short spell of freedom from prison, but not for long.
On their minds was the Irish language.  It never left Bobby Sands's mind, tongue and pen.
In the darkness of his prison cell he wrote a short story The Lark and the Freedom fighter - the word for lark in Irish is 'fuiseog'.

The Irish-medium school was named with Bobby Sands's pen name and as I pointed out several years ago it was named to honour Bobby Sands.  Indeed I also pointed out that the founders of the school viewed Sands as a role model and an inspiration for the children
Irish language activists attempt to portray the Irish language as part of a shared heritage and as a cross-community pursuit but examples such as this remind us of the way that the Irish language has been used as part of Sinn Fein's 'cultural war'.

Posted by Nelson McCausland MLA at 16:39