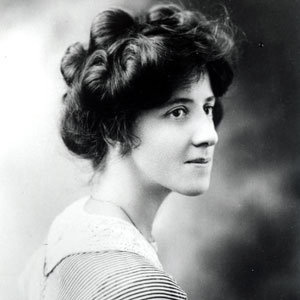 In my previous post I pointed out that Marie Stopes opposed abortion and described it as murder.  However there are other facts about her that the promoters of the Marie Stopes clinic would probably prefer you not to know.
Marie Carmichael Stopes was born in Edinburgh on 15 October 1880 and educated there and in London.  She received her PhD from Munich University and then became the first female academic at Manchester University, where she lectured in palaeobotany.  However she is remembered primarily for her pioneering work in promoting contraception.

But there are other aspects to Marie Stopes that tend to be downplayed.
Stopes was a keen advocate of eugenics and in 1912 she attended the inaugural meeting of the Eugenics Society.  When she came to write her books about marriage and birth control they were infused with the theory of eugenics and even by the standards of the time she was an extreme eugenicist.  In The Control of Parenthood, published in 1920, she wrote that were she in charge she would 'legislate compulsory sterilization of the insane, feebleminded ... revolutionaries ... half castes.'  Marie Stopes believed in racial purity and that was reflected in her call for the compulsory sterilisation of 'half castes'.
Indeed journalist Zoe Williams, writing in The Guardian on 2 September 2011, admitted that:

Her eugenics programme was actually slightly to the right of Hitler's, just because her definition of defective is so broad.  There are certainly issues of Birth Control News that seem to suggest, just with their news agenda, that some people should be sterilised for nebulous reasons of defectiveness, like not being rich enough.  As you might expect, there are strong strains of racism: she described the southern Italians as a 'low-grade race'; she was accused of anti-semitism by her birth-control allies; and in a stinging attack on the French who, in the early 1920s tightened their laws against contraception, she said tha if they really wanted to repopulate their nation, they should 'eliminate the taint of their large numbers of perverted or homosexual people.

Marie Stopes also supported child labour and wrote, 'Not many years ago the labourer's child could be set to work early and could very shortly earn his keep. ... The trend of legislation has continuously extended the age of irresponsible youth in the lower and lower middle classes.'
In 1935 she attended the International Congress for Population Science in Berlin, held under the auspices of the Third Reich during the second year of Hitler's government.  Then in August 1939, just weeks before the start of the Second World War, she sent a letter to Adolf Hitler, enclosing a copy of her Love Songs for Young Lovers.  Her aim was to have her poems distributed through birth clinics in Germany and she wrote, 'Dear Herr Hitler, Love is the greatest thing in the world: so will you accept from me these (poems) that you may allow the young people of your nation to have them.'
More than once she was accused by other pioneers of birth control, such as Havelock Ellis, another eugenicist, of being anti-Semitic and in 1942 she wrote:
Catholics, Prussians,
The Jews and the Russians,
All are a curse,
Or something worse ...
Marie Stopes took a strong dislike for her son's fiance, Mary, who was short-sighted and wore glasses.  Nevertheless they were engaged in October 1947 and after they were married she cut her son out of her will, citing the eugenics argument that their children might inherit the condition!
She regarded homosexuality as a perversion but had a strange view on marriage.  Free love within marriage was acceptable, so long as the extre-marital partner was of the opposite sex.  In this she had the consent of her husband, as evidenced by a contract drawn up between them in later years.
This is a short summary of the views that Marie Stopes held but it serves to explain why Marie Stopes International when asked about its founder, said, 'We tend to keep our distance.'  Yes, maybe, but they do keep her name over the door.
Posted by Nelson McCausland MLA at 16:37