Sinn Fein on the slide 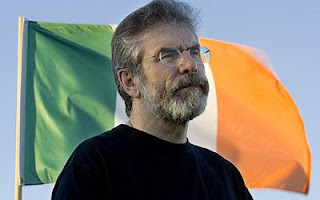 The latest opinion poll in the Irish Republic, conducted by IPSOS/MORI, shows a significant drop in the satisfaction rating for Sinn Fein president Gerry Adams.  His rating fell from 37% in May to 29& in the latest poll, a drop of 8%.  Back in May he was the most popular party leader but that is not longer the case.
One factor may be that in recent weeks Adams has been hit by fresh accusations that he was involved in the Provisional IRA.  Ex-IRA prisoner Dolours Price said that the Louth TD had been a senior IRA figure who had snactioned a bombing campaign in Great Britin and had ordered the deaths of people who were accused of being informers - the so-called 'disappeared'.
Adams has also been hit by comments on his poor performance in the Dail.  In August it was reported that he had one of the worst attendance records in the Dail, having missed 17 of 68 sitting days  for the first six months of the year.  Of course 25% absenteeism is better than Sinn Fein's performance at Westminser where it is 100% absenteeism!
The party itself has also seen a drop in support, down 4%, while Fianna Fail is up by 4%.  As a result Sinn Fein has lost its place as the second most popular party in the Irish Republic.
Some people say that all publicity is good publicity but that is not always the case.  The more exposure Sinn Fein gets in the Republic the more people will see what it is really like and the more its past misdemeanours and its present incompetence will be exposed.
Posted by Nelson McCausland MLA at 23:56