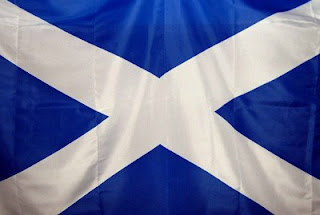 Last night Mary and I attended the annual St Andrew's night dinner of the Belfast Benevolent Society of St Andrew.  The society was founded on 14 September 1867 at a meeting in the Belfast Athenaeum in Castle Place and it is approaching its 150th anniversary in 2017.
It was a very enjoyable evening and the visiting speakers were Scottish sports broadcaster Archie McPherson and Ulster broadcaster Helen Mark, who is also a Scot.  Archie told us a number of amusing anecdotes about Scotland and Scottish football while Helen spoke of the Ulster-Scots and described the 'narrow sea' between Ulster and Scotland as 'a well-travelled path' and one that has been travelled in both directions.
The following brief history of the society was provided on the tables for guests:
The founders included Belfast businessmen who were born in Scotland, such as John Arnott from Auchtermuchty and David Taylor from Perth.  Arnott and Taylor had founded Arnott's Stores, drapers and  outfitters in Bridge Street, Belfast.
Charles Mitchell, who was born in Glasgow and who owned a distillery in Tomb Street, was also instrumental in founding the society.
A rule book was produced and the first annual general meeting was held on 30 November 1867.  According to the 1880 Belfast & Ulster Street Directory, 'Its members are Scotchmen or the sons of Scotchmen, but those who cannot be so defined are also received as honorary members' and the object of the society is 'to alleviate distress, to further such charities as may be deemed worthy of support, and to afford opportunities for the promotion of friendly feelings amongst its members.'  Its motto is, 'Our ain ills aye hae strength to bear, Another's aye hae heart to feel.'
In the early days the society provided practical assistance to people of Scottish birth, including coal allowances, spectacles and boots and tools for workmen.  The society also purchased a burial plot in Belfast city Cemetery and the first burial took palce on 24 July 1898.  The plot is marked by a rough-hewn stone with the Cross of St Andrew.  More recently, in 1974 it built ten bungalows for older people.
The society has always promoted Scottish culture in ulster and on 19 September 1893 a bronze statue of Robert Burns and other items relating to the poet were presented to the Belfast Museum by 'the poet's countrymen and admirers in Belfast'.  The originator of this presentation was James Dewar, secretary of the Belfast Benevolent Society of St Andrew.
More information is available on the society's website at www.standrewssocietybelfast.co.uk
Posted by Nelson McCausland MLA at 15:50