Charlotte Elliott and 'Just as I am' 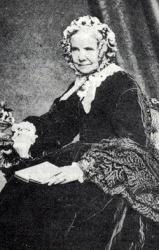 Charlotte Elliott (1789-1871) was the daughter of Charles Elliott, a silk merchant, and his wife Eling Venn.  Her maternal grandfather was Rev Henry Venn (1725-1797), an evangelical minister in the Church of England, and she had two brothers who were also ministers in the Church of England.
On one occasion she was visiting friends in London and met the Swiss evangelist and hymn writer Cesar Malan.  While they were having supper he asked Charlotte if she was a Christian.  Although she had been brought up in a Christian home, she was taken aback by the question and she replied that she would rather not talk about it.  However the question proved to be a turning point in her life.
Some time later she met Malan again and confessed that ever since he had spoken to her she had wanted to come to Christ but she did not know how to come.  Malan replied, 'Come just as you are.'
Charlotte pondered those words and came to trust in Christ as her Saviour and Lord.  She also wrote the lovely old hymn:
Just as I am, without one plea,
But that Thy blood was shed for me,
And that Thou bid'st me come to Thee,
O Lamb of God, I come!
Down through the years many people have indeed come to Christ through the message of Charlotte Elliott's hymn.  She wrote around 150 hymns and many poems but that is certainly her best known hymn.
Posted by Nelson McCausland MLA at 15:37