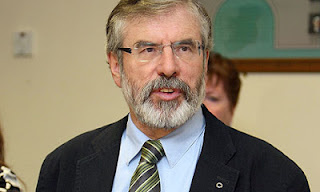 Yesterday in the Dail there was an angry exchange during question time between the Eire prime minister Enda Kenny and Sinn Fein president Gerry Adams.

Adams attacked the government for austerity cuts in relation to welfare but his attack merely exposed his own economic illiteracy.
The exchange became increasingly angry as Adams harangued Kenny.  To highlight his point he referred at length to a woman he had met and spoke about her circumstances and the need for compassion.
This was an open goal for Kenny who referred to Adams' past and raised the issue of the death of Jean McConville, a Balfast woman who was murdered by the Provisional IRA. 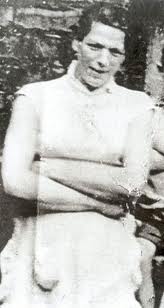 Gerry Adams can talk about compassion but his beloved IRA showed no compassion when they took a widowed mother away from her children, killed her and buried her body far away in a secret grave.  The abduction and the murder happened just before Christmas 1972, exactly forty years ago.
The IRA denied it but eventually had to admit it and one of those involved in the abduction, Dolours Price, has explained:

I drove away Jean McConville. I don't know who gave the instructions to execute her. Obviously it was decided between the General Headquarters staff and the people in Belfast. Gerry Adams would have been part of that negotiation as to what was to happen to her.  I had a call one night and Adams was in a house down the Falls Road and she'd been arrested by Cumann [IRA's female unit] women and held for a couple of days.

And Dolours Price should know about these things.  In 1973 she and her sister Marian Price, along with Gerry Kelly MLA, went on an IRA bombing misison in England.  Later she said that when she went on the IRA mission her commanding officer was Gerry Adams.
Of course Adams denies this but then he would, wouldn't he!
In their exchange in the Dail Enda Kenny touched a raw nerve and Adams was unable to control himself.  He roared across the chamber and refused to heed the order from the speaker to resume his seat.  Eventually the speaker had to suspend the session.  It was personal, it was bitter and Adams simply couldn't cope with it.
It is clear that  Gerry Adams is becoming a hindrance to Sinn Fein in the Republic.  He is damaged goods and he is simply not up to it.

The other day Adams was back in Belfast for the unveiling of a mural about Pat Finucane, so he can't say we should all forget the past.  But he seems to forget his own past.  There is a Sinn Fein strategy of trying to rewrite history and remove the guilt of the IRA.  That must never be allowed to happen and the more that Sinn Fein attack other political parties in the Republic the better, because the more they will be reminded of their own bloody past.

Posted by Nelson McCausland MLA at 19:23