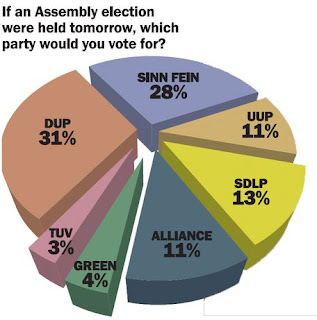 The latest opinion poll on political parties in Northern Ireland appeared yesterday in the Belfast Telegraph.  Of those intending to vote for the main political parties, their relative support is as shown above.
Of course each opinion poll is just a snapshot at a particular time but the pattern of opinion polls over a period of time shows some clear trends.
The DUP is the largest party in Northern Ireland and its support remains firm.  Indeed it has the support of 67.2% of unionist voters.  Of course there is much work to be done and the position of the party can be strengthened further but this is a good poll for the DUP.
However support for the UUP continues to decline and has reached the lowest level in the history of the party.  Back in 2003 it was the largest party in Northern Ireland but after a succession of leaders it is now down to a poor fifth.  The comparable figure at the last Assembly election was 13.2% and like his predecessors Mike Nesbitt seems unable to reverse the decline, which is most serious in the east of the province.
Interestingly the Alliance Party has gained some ground and this seems to be amongst Roman Catholic voters.  However all is not well in the Alliance camp, which is deeply divided about 'same-sex marriage', and is now embroiled in a controversy about the Union flag at Belfast City Hall.
The poll was taken between 6 and 23 November and so the results were not affected by the recent DUP conference.
Posted by Nelson McCausland MLA at 04:46