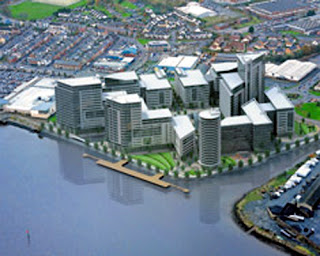 Yesterday I travelled up to Londonderry for the official launch of the North West Regional Science Park at Fort George in Londonderry and the Letterkenny Institute of Technology.
Fort George is key development for my department and the launch today signifies the first major step in unlocking Fort George's true potential.  The total European investment of £12 million, in Londonderry and Letterkenny, represents a significant investment from Europe to the area.
This coupled with my department's contribution to the North West Regional Science Park project at Fort George, which is over £1 million, will help to make the regeneration envisaged for Fort George a reality.
It is expected that this investment will encourage high-quality technology and knowledge-based businesses to Londonderry.  It will also contirbute to the One Plan job targets through knowledge service jobs in the longer term and in the short term it will help boost the construction industry.
My department has played a pivotal role in taking this project forward, alongside the other key partners, who have all worked incredibly hard to get us to this point, including ILEX, the North West Regional Cross Border Group, Northern Ireland Science Park, Letterkenny Institute of Technology, SEUPB and DFP.
The outline planning application for Fort George, which has been lodged with Planning Service, foresees major mixed use development on Fort George.  The North West Regional Science Park is a key component of that vision and will help to pave the way for further developments on the site.
My planned  investment n the Fort George site over the coming two years includes preparing the whole site in a state of readiness for the private sector and putting infrastructure on site.
The North West Regional Science Park will add to the recent regeneration works undertaken by my department in the city.  Those have inlcuded the £9 million investment in the public realm at Waterloo Place and Guildhall Square and the £15 million investment in the preparations for the United Kingdom City of Culture in 2013.  In addition the public realm works at Queen's Quay will help to improve the all important arterial linkages from the city centre to Fort George.
2013 will be an exciting year for Londonderry - with the proposals for Fort George and the United Kingdom City of Culture events, there is much to look forward to.
Earlier this week the Minister for the Environment anounced that planning permission for the NWRSP building had been turned round in just 14 weeks.  I hope that this sets a benchmark for other major planning applications, in particular another EU funded project, the Community Hub on the Girdwood site in North Belfast.
The wider development on the Fort George site will include residential, office, leisure, light industrial, eductaional, community facilities, convenience retail, cafe and restaurants.
I notice that some commentators in Londonderry have observed that the development of the entire site will take around ten years. That is not in the least surprising. This is a large site and the development of such sites, which involve public and private investment, is generally taken forward on a phased basis eg the Gasworks in Belfast.
A programme of decontamination will have to be carried out as the site, which was associated with shipbuilding from 1912 and became a Royal Naval base for ship repairs in 1941.  Decontamination work will not be completed until 2014 but work on the Science Park is expected to start by next March.
﻿
Posted by Nelson McCausland MLA at 13:18