Over to you Alasdair - what about Newry & Mourne? 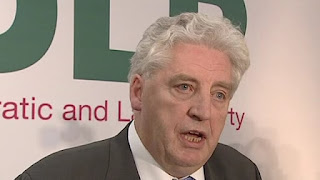 According to the Belfast Telegraph this morning (6 December), SDLP Councillor Claire Hanna, who represents the Balmoral area of South Belfast, has 'slammed a vote supporting the naming of a Newry play park after an IRA terrorist'.  She took to Twitter to say that the decision, which was backed by 20 Sinn Fein and SDLP councillors, was 'a bad one'.
Then speaking to the Belfast Telegraph she said, 'I personally believe that this is a disappointing decision'.
There was some division among the SDLP councillors in Newry & Mourne and SDLP councillor Frank Feely abstained while SDLP mayor John McArdle left the meeting before the vote.  Nevertheless many of the SDLP councillors voted that the children's playground should still be named after an IRA terrorist.
The crack in the SDLP has widened with the comment by Councillor Hanna but what about her South Belfast colleague Alasdair McDonnell MP MLA, who is also her party leader.  He has remained totally silent on the matter.
Some weeks ago he was running to the media all the time about a shared future and shared housing.  Now, when his councillors in Newry & Mourne back a squalid and sectarian decision, he is nowehere to be seen. Does he back their decision or not?  It's over to you Alasdair, yes or no?  Do you, as SDLP leader, endorse the naming of the playground after a terrorist, or will you speak out and condemn the action of your councillors in Newry & Mourne?  Otherwise your comments about a shared future and shared housing are simply hypocrisy.
Surely a playground is for every child and not just for those whose parents idolise an IRA gunman!  What about children whose parents suffered at the hands of the IRA?  What about parents who just don't like terrorism?
I have been disappointed by the failure of our media to confront Alasdair McDonnell.  Perhaps he has been running away from them but he can't run for ever and the comments by Claire Hanna increase the pressure on him to quit hiding and speak up.
Of course, actions speak louder than words and we have a right to expect certain actions from the SDLP leader.  I believe he should discipline those SDLP councillors in Newry & Mourne who backed the name Raymond McCreesh Park.  I also believe that he should instruct them to work with fellow Unionist councillors to reverse the decision.
So it's over to you Alasdair!
Posted by Nelson McCausland MLA at 06:54