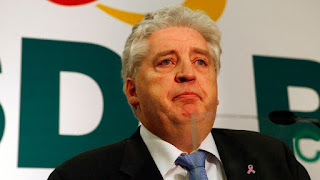 Now Alex Attwood MLA has joined the controversy about naming a children's playground after an IRA terrorist.  Attwood has said that SDLP councillors in Newry & Mourne should reconsider their support for the playground being named after IRA gunman Raymond McCreesh.  The environment minister said that people should be careful not 'to glorify elements of the Troubles.'
Attwood is now the second SDLP politician from Belfast to criticise the Newry & Mourne councillors.  But SDLP leader Alasdair McDonnell has remained silent and has failed to intervene in the sordid affair.  As party leader he should have shown leadership but instead he has maintained a stony silence.
Earlier this week Nigel Dodds MP raised the issue at Northern Ireland Questions in the House of Commons.  Unfortunately the Northern Ireland Secretary of State Theresa Villiers MP ducked the issue while SDLP leader Alasdair McDonnell MP and former leader Margaret Ritchie MP sat there looking distinctly uncomfortable.
It is clear that there is a split in the SDLP about the controversy and that McDonnell doesn't know what to do.  Once again he is like a rabbit caught in the headlights, unwilling or unable to lead his party.
So how long will Alasdair McDonnell maintain his stony silence?  How long will Alasdair McDonnell bury his head in the sand?
Oh ....  and how long will it be before our local media really challenge McDonnell about what was a thoroughly sectarian decision in Newry & Mourne?
Posted by Nelson McCausland MLA at 11:59