This morning in the Irish News, journalist Allison Morris discussed the decision by the PPS not to pursue the prosecution of a number of men in relation to the murder of reporter Sunday World Martin O'Hagan in 2001.
She ended her analysis by saying: 'Meanwhile, the family of the investigative reporter, who spend his career exposing the nefarious activities of men who later killed him, have been left bereft of justice.'  That final phrase 'bereft of justice' caught my attention.
I thought of so many terrible atrocities perpetrated by paramilitary organisations during the Troubles and yet so many remain unresolved, with no one prosecuted, no one convicted and no one held to account - La Mon and Bloody Friday are just two of many such atrocities. 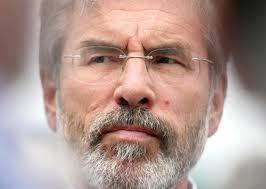 Sinn Fein and a number of republican campaigning groups have been to the fore in demanding justice but they have not been to the fore in delivering justice.  They demand  Gerry Adams and many other senior figures in Sinn Fein could deliver justice for many families by telling us what they know about the murders and the atrocities perpetrated by the Provisional IRA.
In the meantime, we may not be able to extract the information locked away in the minds of Sinn Fein politicians, but there is one thing we must do and that is prevent them rewriting history.  The carnage perpetrated by the Provisional IRA and encouraged and eulogised by Sinn Fein must not be forgotten.

Posted by Nelson McCausland MLA at 08:18