Martin O'Hagan and the Workers' Party 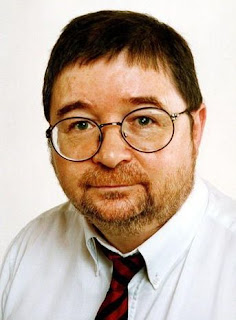 Over the last few days there has been media coverage of the decision by the PPS not to pursue prosecution of a number of men for the murder of Sunday World journalist Martin O'Hagan on 28 September 2001.

His murder was claimed by the Red Hand Defenders but this was sometimes a cover-name for the LVF and the Sunday World has named five members of the LVF as responsible for his murder.
It is believed that he was shot because of articles he had written about loyalist paramilitaries.  He had previously been abducted and questioned by the Provisional IRA because of other articles in the Sunday World.

Before turning to the subject of this post let me be absolutely clear - human life is given by God and murder is a sin - it is always wrong and those who are guilty of murder should be punished.

Owen Martin O'Hagan grew up in Lurgan and his father and grandfather served in the Brish Army but the family also had strong links to the republican movement.  His cousin Dr Dara O'Hagan was elected as a Sinn Fein member of the Northern Ireland Assembly in 1998 and now works for Sinn Fein as a senior adviser.  Moreover her father, Joseph B O'Hagan, was the Provisional IRA quartermaster-general in Northern Ireland.
According to an obituary in The Guardian [1 October 2001] Martin O'Hagan joined the Official IRA 'as a teenager'.  O'Hagan was born in June 1950 and ceased to be a teenager in 1970.  Since the Provisional IRA split from the IRA in December 1969 he must have joined the IRA before the split or else he joined the Official IRA shortly after the split.  Whatever the precise time he was certainly a socialist republican and on the other side of the split from his cousin and uncle.
O'Hagan was interned in 1971 and then after his release he was charged with transporting guns for the Official IRA and sentenced to seven years in prison.  The Official IRA declared a ceasefire in 1972 but continued to exist as an armed paramilitary organisation and it had an important role as a criminal fundraiser for the Workers' Party.
After his release in 1978 he studied sociology at university and in the early 1980s he was given a largely unpaid position with 'the left-wing Irish political periodical Fortnight'.  This was to be his entrance into a career in journalism.  In The Lost Revolution: the story of the Official IRA and the Workers' Party, Brian Hanley and Scott Millar comment:

Despite the WP's poor electoral showings, the party's politics had an impact on wider understandings of the conflict.  Fortnight magazine regularly carried articles by writers and journalists associated with the WP, including Martin O'Hagan, John Hunter, Kathryn Johnston and Robin Wilson.

In this way the Workers' Party was able to influence public opinion and public debate.  They were never going to achieve their goal by electoral politics and neither could they mount a successful revolution but they could influence society and change it incrementally by having their members work in the media and in civic society.  This was the theory of the Italian communist Antonio Gramsci and I can well recall Robin Wilson, during a conversation in the Community Relations Council, expressing his admiration for Gramsci.
Martin O'Hagan then began casual work for newspapers and eventually joined the staff in the Belfast office of the Sunday World.  The brash tabloid newspaper was based in Dublin but at that time the Belfast office was under the editorship of Jim Campbell.  Of this newspaper Hanley and Millar comment:

The Sunday World remained an outlet for WP publicity and its populist analysis of the political situation was often in line with the party's positions.  The paper steered clear of any reference to the actvities of Group B [Official IRA], but its exposes of criminal activity by other loyalist and republican paramilitaries was not without its costs: its Northern editor, Jim Campbell, was badly wounded in a UVF shooting in May 1984.

The silence of the Sunday World about the criminality of the Official IRA contrasted sharply with its focus on the criminality of other paramilitary organisations and is therefore all the more remarkable.  Moreover this was no accident.  There were people on the staff of the Sunday World who were or had been members of the Workers' Party or the Official IRA.  Are we to believe that they had sources of information about every other paramilitary organisation but no sources of information about the Official IRA?  I think most people will find that rather hard to accept!
The question becomes all the more interesting in view of a document written in 1989 by Sean Garland to the Communist Party in East Berlin, admitting that the Officials were engaged in criminality to raise money for the party.  The recent discovery of this document by the Irish Times sheds a new light on that era of the Officials and the journalists and others who were at various times associated with the Official republican movement.
Posted by Nelson McCausland MLA at 12:27