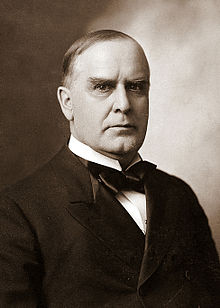 Eddie McIlwaine's page in the Belfast Telegraph is something I look forward to reading and today he highlighted something I had not heard of before, Carnation Day, 29 January.
The carnation was the favourite flower of William McKinley, the 25th president of the United States of America, and he always wore one on his lapel.
McKinley was born in Niles, Ohio, on 29 January 1843 and died on 14 September 1901 after being shot by an anarchist assassin.
After his death Lewis G Reynolds of Dayton, Ohio, wrote to the New York Herald Tribune suggesting that on McKinley's birthday each person wear a carnation in his memory.  The idea was adopted and Carnation Day was first observed in the United States of America on 29 January 1903.
The Ulster connection is of course that President William McKinley was a Scotch-Irish American with Ulster-Scots ancestry.  His first Ulster forebear was James McKinley, who came from Perthshire in Scotland.  In 1690 he fought for the Protestant cause under King William III, Prince of Orange, earning the nickname 'James the Trooper'.  Afterwards he settled at Conagher, near Ballymoney, in county Antrim.  In 1743 James McKinley emigrated from Ulster to America and his son David, born around 1730, fought in the Revolutionary War.  This David McKinley was the great-grandfather of the future president.

During the Civil War William McKinley served under Colonel Rutherford B Hayes, who was later to become president, and he was a a major in the 23rd Ohio Volunteer Infantry.  Hayes made McKinley his aide-de-camp and subsequently encouraged his political career.  McKinley was elected to the United States Congress in 1877 and served for fourteen years to 1891.  He continued to build his political base as governor of Ohio, from 1892 to 1896, in addition to serving the Republican Party nationally.

McKinley was elected president in the election of 1896 and served from 1897 to 1901.  The greatest event in his presidency was the intervention of the United States to secure Cuba's independence from Spain.  He was returned to office for a second term but he was shot by an assassin at Buffalo on 6 September 1901 and died on 14 September.

President McKinley ewas a member of the Scotch-Irish Society of America and in 1893 he welcomed the 5th Scotch-Irish Congress to Springfield, Ohio.  Also that year he attended the Columbian World's Fair in Chicago and told the members of the McKinlay clan, 'Your ancestors of the McKinlay clan came to this country directly from Scotland, while mine came from the North of Ireland, but we are probably of the same original covenanter stock.'    In 1897 F A Claypool published a book entitled The Scotch Ancestors of William McKinley.
Posted by Nelson McCausland MLA at 14:46