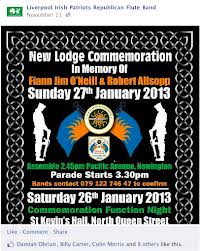 Yesterday afternoon there was an annual parade in the New Lodge area of North Belfast to commemorate two members of the Fianna Eireann, the youth wing of the IRA.
The two youg men were James O'Neill and Robert Allsopp and the march consisted of eight bands, including the local O'Neill-Allsopp Memorial Flute Band.
The annual commemoration also included a function on Saturday night in St Kevin's Hall, featuring the republican band Shebeen.
According to the North Belfast News (26 January), 'Fian Robert Allsopp was killed on March 23, 1975 and Fian Jim O'Neill on February 26, 1976.'
Robert Emmanuel Allsopp was just fifteen years old when he died and his entry in Lost Lives states:

A member of the Fianna, the junior wing of the IRA, he was found lying in his house in the New Lodge area of north Belfast with a bullet wound to the head.  He was discovered by a neighbour who had gone to the Allsopp home to visit the boy's mother.  On receiving no reply to her knock at the door, the woman entered the house and saw the teenager lying on the ground, his head inside the kitchen, his feet stretched out into the yard.  There was no movement and he did not respond to the woman when she spoke to him.  An ambulance was called and the boy was taken to hospital where he died.

Detectives who went ot investugate his death were attacked by a crowd, returning later with an army escort.  The youth had apparently been shot in the head at close range, police indicating they believed his killing may have been accidental.  The gun had been removed from the scene.  The teenager's mother told the inquest that she had gone to work that evening leaving him some money to go to a local disco.  She was later told that he had been involved in an accident.  The police said no weapon was recovered at the house and their appeals for a 13-year-old girl who was seen there around the time of the shooting to come forward went unanswered.

His badly burned body was found in a warehouse on the Antrim Road, next to the home of the SDLP leader, Gerry Fitt.  It was reported that he was attempting to burn down the home of the MP, which was attacked on numerous occasions, during rioting which followed the death on hunger strike  of Frank Stagg.  A detective told and inquest that petrol had been scattered around the warehouse before it was set on fire.  He was identified by dental records and two medallions round his neck.  According to death notices he was a Fianna staff officer.  'Parlo', as he was known, was from Duncairn Parade, and he is listed in the republican roll  of honour as a member of Fianna Eireann.  His uncle, Michael Kane, also an IRA member, was  killed in a premature explosion in 1970. 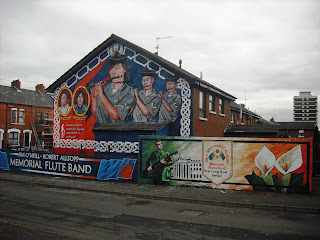 One of the organisers of the parade, Leo Morgan, said, 'These were two young people from the New Lodge who died for Ireland. Their example is one of leadership for the young people of this area, and the flute band shows republicanism in a positive way.'
A fifteen-year-old boy shot himself accidentally with a gun and a seventeen-year-old was burned to death while trying to burn down the home of a nationalist MP.  Did they really die for Ireland?  Were they really 'examples of leadership for the young people' of the New Lodge?  No they were just two young people who lost their lives for nothing as a result of their membership of the Provisional IRA.  These were wasted lives and the Provos were responsible for the deaths of the two young Roman Catholics.
There is also an interesting angle on the death of  Jim O'Neill's uncle.  Michael Kane was killed on 4 September 1970 when a bomb he was handling exploded prematurely at Newforge Lane off the Malone Road, where he was attempting to destroy an electricity transformer.  Afterwards copies of the Voice of the North newspaper were found in his car.  This was produced in Monaghan by Seamus Brady, a member of Fianna Fail.  When the possibility of a split emerged in the IRA, the newspaper, which was funded by the Fianna Fail government, fanned the flames which eventually led to the formation of the Provisional IRA.  The role of the Fianna Fail government in the formation of the Provisional IRA is something that both Fianna Fail and Sinn Fein would prefer to forget.

Posted by Nelson McCausland MLA at 16:02