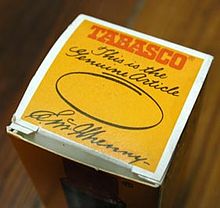 Tabasco sauce was invented by Edmund McIlhenny (1815-1890), a fourth generation American of Scotch-Irish descent.
According to tradition the family came from Argyllshire in Scotland and settled in county Donegal, near Milford, where they remained for several generations.  In the 1740s four brothers emigrated from Donegal to North America, as part of the great Ulster-Scots exodus.  One of them, Ezekiel, settled in Pennsylvania, near its border with Maryland.  His son Robert McIlhenny was an attorney in Adams County.
Edmund McIlhenny was born on 15 October 1815 at Hagerstown, Maryland.  His father was the owner of McIlhenny's Tavern, which sat on the northwest corner of the public square, and he was also the mayor of Hagerstown.
In 1841 Edmund McIlhenny moved to New Orleans, where he worked as an agent for the Bank of Louisiana.  Later he became an indpendent banker and in 1857 he purchased five branch banks in southern and central Louisiana.
He was now a wealthy man and in 1859 he married Mary Eliza Avery, daughter of a prominent jurist in Baton Rouge.  Her family owned a sugar plantation on an island, Avery Island, and when the American Civil War started the Averys and the McIlhennys sought refuge on the island.  However the plantation was destroyed by Union soldiers.  The families fled to Texas and Edmund became a civilian employee of the Confederate States Army.
After the war had ended, McIlhenny found himself with few prospects.  The economy of the South was in ruins and his millions of Confederate dollars were worthless.  He had no choice but to return with his wife to her family home at Avery Island.
There he began blending red peppers, salt and vinegar to create the Tabasco brand pepper sauce.  McIlhenny then sent 350 bottles of his pepper sauce to selected wholesalers and soon the 'Famous Sauce Mr McIlhenny Makes' became extremely popular.
Edmund McIlhenny died on Avery Island on 25 November 1890 but his eldest son John Avery McIlhenny took over the business with the assistance of his mother.
When the Spanish American War broke out in 1898 John joined the First US Volunteer Cavalry, better known as the 'Rough Riders', and his brother Edward (Ned) Avery McIlhenny (1872-1949) took over the running of the Tabasco business.  He was also a naturalist, conservationist, world explorer and the author of several books.
Today the McIlhennys still own Avery Island and still make Tabasco sauce using the same formula that Edmund invented all those years ago.
Posted by Nelson McCausland MLA at 16:01