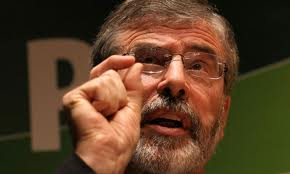 Gerry Adams TD and Conor Murphy MP were in Dundalk yesterday for the local launch of Sinn Fein's campaign for a border poll.
Adams argued that republicans should try to persuade unionists to support a united Ireland.  'This is a significant challenge but one I believe we are up to and can succeed in.'
This is just blind desperation on the part of Gerry Adams.  Support for the Union is stronger than ever.
As Nigel Dodds MP said in the Newsletter this morning:

Those who have spent 40 years campaigning for a united Ireland received a severe body blow with a BBC poll showing two thirds support for the Union.  Not only has Sinn Fein's campaign failed to convince Protestants that a united Ireland is a good idea but a majority of Roman Catholics said they wanted to stay in the United Kingdom. ...  The BBC report is very uncomfortable reading for nationalists - 79 per cent saying they want to stay in the United Kingdom with 23 per cent of Sinn Fein supporters expressing the same view.

Sinn Fein cannot cope with this reality and do not really know how to handle it.  When the poll was announced on a BBC Spotlight Special on Tuesday Gerry Kelly was caught flat-footed and simply retreated into an absurd state of denial.
The plain truth is that Gerry Adams has failed to acheieve his goal of a united Ireland.  His problem is that he dare not admit his failure and so he holds out to his followers the prospect of convincing unionists.  It seems he hasn't even managed to convince all his own followers!
We could call on Gerry Adams to be honest with his own people but there's not much chance of that.  He refuses to be honest about his past so there is little hope of him being honest about the future.

Posted by Nelson McCausland MLA at 06:53