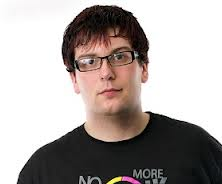 Yesterday (8 February) the Belfast Telegraph carried a letter headed 'Alliance party policy on flags dates from 2002'.  It was a defence of the Alliance Party's vote to restrict the number of days on which the Union flag flies from Belfast City Hall and it was written by Gary Spedding, who described himself as 'Campaigns Officer, Alliance Youth'.
The name rang a bell with me as I was sure I had seen some contributions from a Gary Spedding in relation to Israel and Palestine and so I resorted to google.
Gary Spedding is indeed a member of the South Belfast Alliance Association and campaigns officer of Alliance Youth.  He is also a zoology student at Queen's University and an active campaigner on several fronts.
Spedding founded the Queen's University Belfast Palestine Solidarity Society in 2010 and was president of the society but in November 2012 he was elected vice-president.

The Palestine Solidarity Society takes a strong anti-Israel stance and on 23 February 2011 members of the society disrupted a lecture at the university by Solon Solomon, a former member of the Israeli Parliament's legal department.  According to a report by Ben Finch in The Gown (23 February 2011) Solomon had been invited by Sally Wheeler, head of the School of Law, to deliver an academic lecture on international law.  However the PSS members heckled the lecturer and after seven minutes the lecture was brought to a close.  Members of the panel were then removed by security staff for their own safety.  After disrupting the lecture members of the PSS gathered outside and tried to block the taxi taking Solon Solomon away.  Some students hit the car and tried to stop it but security staff were able to clear a route for the vehicle.
According to the report in The Gown, Gary Spedding said, 'I didn't sanction anyone to hit the taxi, I didn't sanction anyone to stop the taxi, my society doesn't condone violence.'  'He also said that he didn't necessarily disagree with it at the same time.'  Meanwhile Megan Fearon of Ogra Sinn Fein and now a Sinn Fein MLA said, 'It's a disgrace we invited a war criminal.'  It's a bit rich when a Sinn Fein MLA objects to war criminals!
Elsewhere Spedding is quoted as saying: 'I would agree with my friend Norman Finkelstein when he described Israel as a lunatic state.'
Spedding is also active as a campaigner for 'homosexual rights' and is campaign coordinator for Equal Marriage NI, which was launched at Queen's University on 5 July 2012 and which campaigns for 'homosexual marriage'.
Pink News (5 September 2012), Europe's largest gay news service', carried an article by 'LGBT campaigner Gary Spedding' in which he said:

As a community our first priority has mainly been inwardly focussed on our own rights. This has seriously effected how LGBT people and our allies go about our daily lives; we prefer to holiday in gay friendly countries, we are more likely to drink in gay or gay friendly bars and we typically show unwavering support to countries that are good on LGBT rights issues.

Interestingly Pink News also described Spedding as a 'freelance journalist covering the Israeli and Palestinian conflict'.
Spedding is representative of a young ultra-liberal section of the Alliance Party.  The growth of this faction within the party will be a source of trouble for them, both with more traditional Alliance members and with the electorate.
Posted by Nelson McCausland MLA at 15:09