Recently I bought a history of Ulsterville Presbyterian Church in south Belfast and was surprised to read that before being named Ulsterville, it had been proposed that the congregation be named Wilson Memorial, in memory of Field Marshal Sir Henry Wilson (1864-1922) who was elected as the Ulster Unionist MP for North Down on 21 February 1922 and was then murdered by the IRA four months later on 22 June 1922.  Two IRA gunman shot him dead outside his home in London as he returned from Liverpool Street Railway Station, where he had unveiled a war memorial.
The Ulsterville congregation was formed at the start of the 20th century 'under the wing' of Windsor Presbyterian Church and at first it was known as Lower Windsor.
Back in 1894 a site for a new church and school had been purchased at the foot of Tate's Avenue and Donnybrook Street and Rev J C Ferris, the first minister at Windsor, held 'cottage meetings' in Great Northern Street.  In January 1901 a new schoolhouse was opened on the site at Donnybrook Street at a cost of £1,050.
Services started in the new building on 13 January 1901 and paved the way for the formation of what was called Lower Windsor Presbyterian Church.  'A meeting of those interested in Lower Windsor Presbyterian Church was held in the school in Donnybrook Street on Sabbath 7th April 1901' and an interim session met on 8 May 1902 to receive intending communicants.  The first communion service was conducted on 11 May 1902 at Donnybrook Street Hall and in June 1902 the General Assembly gave permission to form a congregation in the district of Lower Windsor.  In June 1903 the name was chaged to Ulsterville.
From 1903 to 1922 the congregation met in a church building in Edinburgh Street, which had previously belonged to the Congregationalists and to the Primitive Methodists.
A new church building was then erected on the Lisburn Road and the foundation stones were laid on 21 April 1923.  The previous year and shortly after his election to Westminster, Sir Henry Wilson had offered to lay a foundation stone for the new church but he was murdered shortly afterwards, on 22 June.  Immediately after his death the committee asked Lady Wilson to lay the foundation stone and agreed unanimously that the name of Wilson Memorial be submitted for her approval.  However there is no record of any response and no further reference to the proposal. 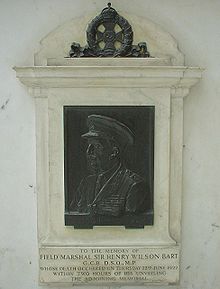 This led me to think of other memorial to Sir Henry Wilson and there is a fine memorial in Liverpool Street Station in London, adjacent to the war memorial that he had unveiled shortly before his death.  here is also a fine portrait of Sir Henry Wilson in Belfast City Hall.  But are there any other memorials to this Ulster Unionist MP who was murdered by the IRA?
Posted by Nelson McCausland MLA at 23:30