Thanks to the Irish News!

I haven't posted anything on this blog for some days - pressure of work and other commitments have taken up so much time that it wasn't possible but I am glad to see that the daily pageviews remain at a very healthy level.
Nevertheless I am grateful to the Irish News (25 April) for devoting a whole page, apart from advertisements, to this blog!
Their story is based on information obtained under Freedom of Information through the website What Do They Know.  Since 2008 there have been 51 FoI requests to DSD from this website.

This particular FoI request was made by someone named Ben who appears to be a Ben Brown but of whom at present I know nothing other than that he is a prolific user of FoIs.
He requested information about how many DSD staff accessed my blog from DSD computers while they were at work.  The answer was 11 and I am glad to see that the figure was low.  I would be very disappointed if civil servants were spending too much time accessing blogs, even mine, during working time.  Indeed I understand that many staff are unable to access any blogs on work computers but I will have to check that out.
Now for the benefit of 'Ben Brown', the Irish News and anyone else who read the article, the number of pageviews every day currently stands at anywhere between arround 300 and 3,000 and depends on what has been posted.  As regards that audience I get pageviews from across the British Isles and also from many parts of Europe, the USA and Canada. 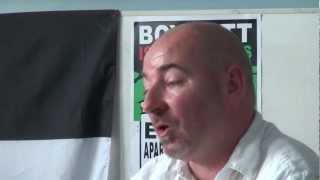 The Irish News also referred back to a post from last year and stated:

Last year he removed the business address of human rights activist Fra Hughes from his blog following a complaint to police.

For those who have forgotten Fra Hughes, he set himself up last summer as a 'human rights observer' at Loyal Order parades on the Crumlin Road.  I don't know what qualifies Fra Hughes or indeed anyone else to be a 'human rights observer' but there he was taking close up photographs of Protestant spectators in a way that was intrusive and invasive.
At the time I didn't know who Fra Hughes was but later it was pointed out to me that his name, his picture and his business address were on a North Belfast Sinn Fein blog and a Sinn Fein website.  I copied that information across to this blog and Fra Hughes then complained to the PSNI.
When a policeman phoned me to say that there had been a complaint from Fra Hughes he said very clearly that I had done nothing wrong and broken no law and he simply passed on a request for the information to be removed.  Being of a generous nature I removed the reference to Fra Hughes' place of business on the Cavehill Road and the Irish News and the North Belfast News seemed to get rather excited about this.  Thereby drawing further attention to Fra Hughes but both papers missed one key point.  The details of Fra Hughes business were still there on the Sinn Fein website and the blog and they have been there since 27 August 2010, a period of two years.
Fra Hughes objected to the information being on a unionist blog but not to it being on a Sinn Fein blog and website.  Surely if someone is concerned about his safety, as Fra said that he was, he would ensure that the information was also deleted from the Sinn Fein blog and the Sinn Fein website?  Does he think that only republicans read the information on Sinn Fein websites?
Moreover, I have just checked the North Belfast Sinn Fein website and their blog and the details of Fra Hughes business are still there today!  It really is farcical.
Finally, as a sort of recommendation, the Irish News journalist said that it was 'unfortunate' that 'few MLAs run a personal blog like social development minister Nelson McCausland.'  Yes I think I can definitiely take that as a sort of recommendation!
Oh yes, and back to 'Ben Brown'.  He also asked under the same FoI request if I had ever asked for DSD not to buy the Irish News and the answer was 'no'.  Isn't it important to know what is going on in the world of 'Pro Fide et Patria'?  But it makes me wonder if there is some connection between Ben Brown and the Irish News or did the newspaper simply pick up the FoI information from the What do Thery Know website?

Posted by Nelson McCausland MLA at 17:31