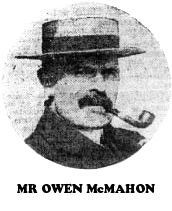 In a previous post I referred to an incident on 24 March 1922 when five people were shot dead in a house in Kinnaird Terrace in Belfast.  They were Owen McMahnon, a publican, three of his sons, and a barman who lived with them.  McMahon was also a director of Glentoran Football Club.
In 1961 Rex Taylor, an English author who was sympathetic to Irish nationalism, wrote a book on the assassination of Sir Henry Wilson, the Ulster Unionist MP for North Down, and in it he referred to the McMahon murders: But soon a few astonishing facts came to light, though none of them tended to lessen the degree of Nixon's guilt. It was found that the late McMahons were the paymasters for the IRA trouble-makers in the North, a fact proved by a leakage from the banks of the necessary funds. With the deaths of the paymasters there came also, for a time at any rate, a sudden lull in Belfast.
I had never come across that suggestion previously and so asked if anyone had any more information.  I didn't receive any answers but yesterday I came across the background to this in a book entitled Northern Divisions: The Old IRA and the Belfast Pogroms 1920-22 by Jim McDermott.
McDermott's grandfather, also Jimmy McDermott, was an IRA officer in Belfast in the 1920s along with his brother Johnny.  The author himself is a teacher and historian.  The book was published in 2001 by Beyond the Pale Publications, which is based in Conway Mill in West Belfast.
At 12.15 on 23 March 1922 two A Specials were murdered by the IRA and this was followed by the attack on the McMahon home.  Jim McDermott quotes from a memoir written by Sean Montgomery, a member of the IRA at that time:

There was an attempt to disarm two Specials in May Street.  This was in the charge  of the Brigade OC and after of the Market company.  The two Specials died and one of the worst reprisals ever was the shooting of the well known McMahon family and McKinney their barman.  The McMahons were missed because they gave a sum of money which was in a book captured by the police.

Jim McDermott comments: 'While it is doubtful if the IRA group only wanted to disarm the Specials, it is conceivable that Owen McMahon did give a sum of money to the IRA.  There is often an ambivalence in Belfast nationalists about republicans and guns.'
Posted by Nelson McCausland MLA at 00:51