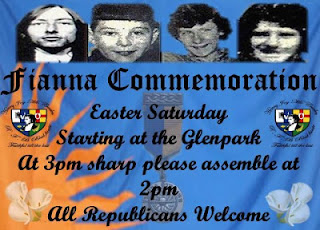 On Saturday 30 March the Henry Joy McCracken Republican Flute Band and the Republican Network for Unity organised a parade and republican commemoration in Ardoyne. Much of the focus has been on the fact that during the commemoriation a dissident republican gunman dressed in combat gear fired around eight shots from a handgun and that small children in the parade were dressed in paramilitary uniforms.

However it is worth remembering what the commemoration was actually about. It related to four teenagers who died in the 1970s and who were members of the Provisional IRA's youth organisation Na Fianna Eireann.

Paul Crawford from Warrenpoint, the national vice-chairman of the RNU gave the oration in Ardoyne and spoke about the four members of Na Fianna Eireann.
David McAuley
Josh Campbell
Joseph McComiskey
Bernard Fox
David McAuley was just fourteen years old when he was killed on 19 February 1972. After he was shot he was taken to a hospital in Dundalk in the Irish Republic and there a doctor signed a document stating that he had died from a 'non infectious disease'. However as his hearse was being brought back north it was stopped at Banbridge by the RUC. On inspection it was found that he had a gunshot wound to the stomach. The cortege had been stoppped when it was noticed that the coffin was covered with a tricolour. After a two-hour delay the cortege was allowed to proceed on to Ardoyne.

Later it was established that McAuley had undergone surgery in the Dundalk hospital to have a bullet removed but the facts about the shooting have never been confirmed. Was he shot at an IRA training camp in the Republic, or was he shot in Ardoyne and then taken south to Dundalk for treatment?  The incident was raised at Stormont and John Taylor MP, the minister for home affairs, said that the integrity of the medical profession in County Louth was in doubt.

The North Eastern Health Board in the Republic, which controlled the hospital in Dundalk, denied that the document was a death certificate and said that it was only for the purpose of getting through customs. If he had died from an infectious disease certain precautions would have had to be taken before the body would have been allowed across the border.

At the funeral there was a bodyguard of Fianna in full uniform and five shots were fired. David McAuley's father confirmed that his son had died from gunshot wounds but would not comment on the circumstances. He told a reporter that his son had 'left home only a few hours when i heard that he had been shot. I do not know how it happened.'

However in a you-tube clip (8 October 2009), uploaded by Ogra Shinn Fein, Sinn Fein councillor Conor Maskey delivered a tribute to David McAuley and said clearly that he engaged in 'armed struggle" and 'died as a result of an accident with a weapon.'   He did not say if the accidental shooting took place in Ardoyne or Louth.

This is confirmed by Martin Og Meehan on his Ardoyne Republican blog and he should know because his father Martin Meehan was a senior IRA man in Ardoyne.  He states that 'Fian Davy McAuley was fatally wounded from an accidntal discharge from a weapon he was handling.'  He also states that at the time of his death the boy was the OC of the local Fianna Slua (branch).

Lost Lives gives the age of the boy as 14 but republicans give his age as 15.  Either way those who put a loaded gun into the hands of a boy of 14 or 15 are ultimately responsible for his death and that was the Provisional IRA.

The Conor Maskey clip was posted in 2009 and the following year, 2010, dissident republicans in Ardoyne started a commemoration of the four Fianna, probably as part of their claim to be the legitimate republican movement and the inheritors of that tradition.

Twelve members of Na Fianna Eireann were killed in 1972 and four of them were from Ardoyne.
Posted by Nelson McCausland MLA at 04:55