Update on the Ardoyne dissident parade 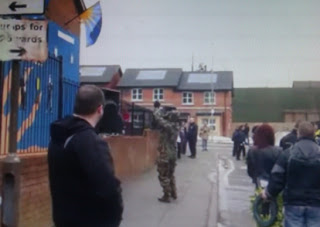 Yesterday North Belfast MP Nigel Dodds condemned the dissident republican parade organised in Ardoyne on Saturday by the Republican Network for Unity and the Henry Joy McCracken Republican Flute Band.
He highlighted two aspects of the parade, the involvement of very small children dressed in paramilitary uniforms, and the fact that a masked gunman in full paramiltary garb fired a number of shots from a handgun.
He referred to the role of the PSNI in investigating the parade and yesterday a DUP delegation met the North Belfast commander of the PSNI to demand a thorough investigation into the firing of shots, which is a criminal offence.
He also spoke about the role of the Parades Commission, which will have to take full account of this event in considering future parades by the band.  The commemoration was chaired by Martin Og Meehan of the RNU and the speaker was Paul Crawford, national vice-chairman of the RNU but the 11/1 form for the parade was submitted by the band and the commemoration at Berwick Road, which included the firing of at least eight shots by a gunman in combat gear, was part of the parade.
A DUP delegation is due to meet the chair of the Parades Commission tomorrow as a prelude to a meeting with the full commission at a later date.  What happened on Saturday must have serious repercussions for the Henry Joy McCracken RFB and anythings less will remove any remnants of credibility the Parades Commission may have.
As regards the involvement of small children in paramilitary uniforms, Nigel Dodds spoke in terms of child abuse and referred to the office of the Children's Commssioner (NICCY).  That comment has now borne fruit and tonight it was reported by the BBC that the Children's Commissioner, Patricia Lewsley-Mooney, has condemned the episode saying that it was placing children in danger.  Tomorrow morning when NICCY reopens after the holiday we will be requesting a meeting with the commissioner.
﻿﻿
The BBC also reported that they had tried to contact the Republican Network for Unity but were unable to get any response from them.  Martin Og Meehan and the other dissident leaders in Ardoyne have obviously run for cover, trying to think of how they can explain it all away.

There was good coverage of the issues in the three morning newspapers today and there should be more tomorrow.  The Irish News was especially good with the whole of page 1 and more on page 7.  The paper quoted RNU spokesman Ciaran Cunningham as saying that the group had helped organise the parade but the 'pageantry' had been organised at a local level.  I assume the word 'pageantry' refers to dressing up children as young as five or six in the uniform of a terrorist organisation.  As regards the gunman Cunningham said 'I know absolutely nothing about the shots being fired.'  And if you believe that .....

Posted by Nelson McCausland MLA at 12:26