Sinn Fein know how to put on a polished conference but behind that polished façade Sinn Fein is a party in disarray.
They don't know what to do about issues such as welfare reform and education reform and there is clearly a lot of bitterness and struggle within the ranks of the organisation. 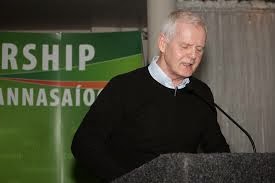 Ken Reid has just tweeted that Leo Green is not at the conference because he has resigned from the party.

Green was a very senior republican who belonged to a thoroughly republican family.

He was convicted for the murder of a police officer and according to the West Belfast Sinn Fein website:

Lurgan man Leo Green went without food for 53 days during the 1980 hunger strike.  He is currently working as part of Sinn Fein's Assembly support team at Stormont.  Leo was arrested in 1977 and sentenced to life imprisonment.  He spent over 17 years in prison.

Three of his brothers spent time in prison, two in the North and the other in the 26 counties.  One of them John Francis, was interned, escaped in 1973 and was later assassinated by loyalists working in collusion with the SAS in a farmhouse just across the border in Co Monaghan. 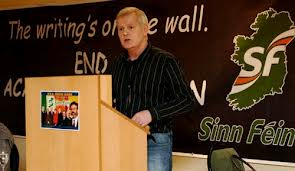 The escape of John Francis Green in 1973 was noteworthy in that he managed to escape by exchanging clothes with his brother Fr Gerard Green, a Roman Catholic priest, who had come to visit him.

But back to Leo Green himself.

Leo Green was at the very heart of the republican movement but has now resigned from the party.  Was his resignation due to a personal dispute or an issue of policy or is it part of a wider unrest in the ranks of republicanism?
Now that I think about it I haven't seen him in the corridors at Stormont for the past few weeks and indeed the more that I think about it he is not the only Sinn Fein advisor who has been noticeable by his absence.  So clearly all is not well in the world of Sinn Fein.
Well done to Ken Reid for highlighting the departure of Leo Green.

Perhaps journalists will now question Sinn Fein and Leo Green himself about his departure and the reasons for it.  We could expect that Monday's newspapers will carry extensive coverage of the resignation of such a senior party member but full scrutiny and analysis but then that may be too much to expect.  You can well imagine the coverage there would be if a senior party member resigned from the DUP and indeed we have seen the coverage when significant figures have left other parties.  Even a minor difference within another party can merit a full page or more in a tabloid newspaper.  So how much coverage will the resignation of Leo Green receive?
Earlier this week Sinn Fein moved quickly to remove from their websites a number of articles about Sinn Fein Councillor Catherine Seeley - I wonder how long the interview with Leo Green, from which I quoted, will stay on their website.
Posted by Nelson McCausland MLA at 10:57