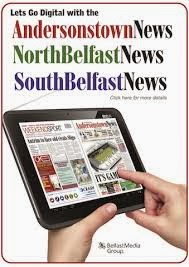 Squinter devoted his entire column in the North Belfast News (8 February) to the Irish language and some recent comments about the language.
In it he said:

The most common argument among those who oppose the learning of the Irish language is that it has been politicised by republicans.  And to back up that argument they threw about with gay abandon a line that vividly backs up their thesis: 'Every word of Irish spoken is another bullet fired in the struggle for Irish freedom.'  It's hard to imagine a turn of phrase more likely to send you average Prod into paroxysms of fear and anger.  But wait a minute.  Just who was it that said these dread words?  When were they said?  Where?  Why?  The truth is that nobody knows.  The line just seemed to appear from nowhere ... The line - colourful and inflammatory at the same time - has all the hallmarks of the Thiepval barracks Christmas press party , when blokes in green jumpers would feed sloshed journos with the most outrageous propaganda which would find its way unchecked on to the page and on to the airwaves and thus into the public discourse.

So Squinter claims that 'no one knows' who used 'these dread words' or when or why.  Then secondly Squinter suggests that the sentence was concocted by the British Army in Thiepval barracks - blame it on the Brits!
I find that disappointing because, although some Sinn Fein MLAs do read my blog, clearly Squinter didn't bother.  If he had read a post from Wednesday he would have the answers to his questions.  It was not invented by the British Army but was used at a Sinn Fein cultural seminar back in 1982 and then published later that year in a Sinn Fein booklet.
Once again Sinn Fein are trying to rewrite history.  In those days back in 1982, when the Provisional IRA were bombing and murdering in a wholesale campaign of terrorism, Sinn Fein found it perfectly acceptable to say that every word of Irish was like a round for an armalite rifle.  But now, when they are trying to become more mainstream they want to distance themselves from such 'colourful and inflammatory' rhetoric.  Unfortunately they put in in print back in 1982!  This was not some British Army invention but an example of the crude and inflammatory nature of Sinn Fein's cultural war, in which the Irish language was their primary weapon.
Someone might suggest that the Andersonstown News has forgotten about the 1982 Sinn Fein booklet but that doesn't really stand up as an excuse since Mairtin O'Meuilleoir, who has had a long standing association with the Andersonstown News, wrote the forward to the booklet that contained the phrase.  Perhaps he or one of the Sinn Fein MLAs who read this blog will take the opportunity over the weekend to pass the word on to Squinter!  However I won't be holding my breath on that one.
Towards the end of his column Squinter also wrote:

In other words, and to use a fine Ulster-Scots phrase that surely George would approve of, it's all a lot of ballix.'

Well Squinter, it doesn't seem like Ulster-Scots to me so here is a genuine Ulster-Scots phrase for 'the numpty wha scrieves the airticle' - 'ye wudnae hae a gleed o wut, wud ye!'
So if anyone wants to see the full background to this inflammatory phrase and its roots in Sinn Fein, they have only to look back to my post from Wednesday.

Posted by Nelson McCausland MLA at 10:13