During oral questions in the Assembly on Monday I responded to a recent statement by Dolores Kelly (SDLP) about housing need in the North Belfast constituency.
Nigel Dodds also issued a press statement with a detailed breakdown of the waiting list for social housing in North Belfast, figures which had been obtained from the Housing Executive.
In both cases we rejected and refuted the myth about waiting lists which has been manufactured by nationalists and republicans. 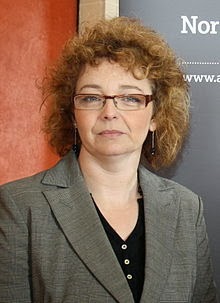 Now the North Belfast News, a sister paper of the Andersonstown News, has devoted much of page 6 to the subject.  One article carries a lengthy statement from Sinn Fein's Caral Ni Chuilin in which she asks for more 'evidence' but nevertheless goes on to say, 'These attempts by the DUP to gerrymander the housing figures in North Belfast and claim a majority of people in need are Unionist, beggar belief.'
In fact we did not manufacture or massage any figures, we merely used the figures provided by the Housing Executive". Moreover. We actually said that the waiting list and the stress list for both communities was roughly the same.
The newspaper then included some material from a recent post on this blog, which explained how nationalists and republicans had manufactured their myth that the overwhelming need is among Roman Catholics.
In the article Ms Ni Chuilin's stance was supported by Practice and Participation of Rights (PPR), which is supposed to offer help to both unionists and nationalists but which has actually lobbied against the interests of some of the most marginalised and neglected unionist communities.
The fact is that in relation to the North Belfast waiting list, SDLP and Sinn Fein politicians and their allies have been completely exposed by the DUP and they don't know what to do.  Hence Sinn Fein has issued a statement which is big on bluff and bluster and short on facts!
It is absolutely essential that the truth is repeated again and again until nationalist and republican propagandists are forced to face up to the truth and abandon their manufactured myth about the housing need being overwhelmingly nationalist.  The need in the two communities in North Belfast is roughly the same.
For years Sinn Fein have talked about waiting lists in the North Belfast constituency and about the numbers who are in housing stress.  Now the whole basis of their propaganda has been swept away and exposed for the sham that it really is.
There is a need for social housing among both unionists and nationalists and that need should be addressed, along with the need elsewhere in Northern Ireland, but there has been no discrimination against nationalists and if anything the discrimination has been against unionists.  Thankfully those days are over.

Posted by Nelson McCausland MLA at 09:14