﻿
I have met Dr Patrick Murphy on a number of occasions.  He was at one time director of the Belfast Institute of Further and Higher Education, now the Belfast Metropolitan College.  More recently I met him when we were both contributors at the first D'Arcy McGee summer school in Carlingford.
He is a very personable individual when you meet him but when he writes his weekly column in the Irish News he often displays an innate cultural bigotry and last Saturday (19 April) was no exception.  His core message was that 'unionism' has no 'cultural dimension' and he said:

The argument that unionism has a cultural dimension is a recent invention.

Of course Murphy was unable to resist the temptation and he followed up this statement by saying:

One Ulster Scots word of the day this week was 'shap' meaning 'shop'.  That is not a language, it is just a Belfast accent.'

In fact the Scottish National Dictionary, which is a standard academic work on Scots, gives the Scots shap as the Scots form of the English shop.  It is not surprising that the two words are similar since English, Scots and Ulster-Scots are sister languages within the West Germanic family of languages. 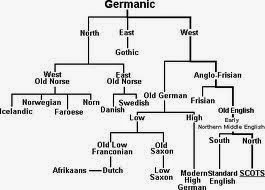 The Scottish National Dictionary explains that the word comes from the Old Scots schap.  It also gives three examples of the use of the Scots word shap.  The first is from the Poems of Allan Ramsey (1728) and the second is from The Scots Magazine (1806).
﻿﻿﻿﻿﻿
﻿
﻿
Allan Ramsey was born in Lanarkshire and the Scots Magazine reference related to Dumfries, however, according to Patrick Murphy both examples were simply a 'Belfast accent'!

The third example in the Scottish National Dictionary is from Ulster and is from the book Ballymulcaghey, written by Mat Mulcaghey in 1928.  Mulcaghey was in fact the pen-name of the author Guy Wilson.

This is not the first time that Patrick Murphy has shown this cultural prejudice against Ulster-Scots language and culture and it will probably not be the last but it says more about him than it does about either the language or the culture.

Posted by Nelson McCausland MLA at 11:53