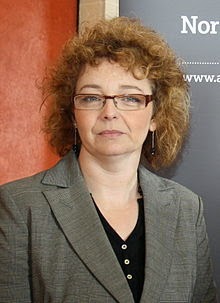 The Northern Ireland Housing Executive is planning to build more houses in Rathcoole.  They have built a number of houses in the estate in recent years but their figures show that there is still a significant waiting list for Rathcoole.  It is a popular estate and last year there were 255 applicants in housing stress for the Rathcoole common landlord area.
As a result the NIHE plans to build 20 houses this year in Deerfin Park and Derrycoole Way and, 10 more in Iniscarn Way and Loughmoney Park the following year and a further 20 in the Derrycoole and Eastway area the year after that.  That makes a total of 50 new houses and that will go some way to meet the need.
However the building of social housing to meet some of the need in a unionist community has clearly angered Sinn Fein MLA Caral Ni Chuilin.
In the North Belfast News (10 May) she complained that the Housing Executive were building too many houses in Rathcoole.  That criticism is nasty, mean-spirited and sectarian.  In fact when the Housing Executive responded to her claims they pointed out that she had got her facts and figures wrong but then that is not unusual.  Sinn Fein seem to adopt the stance of 'never let the facts get in the way of Sinn Fein propaganda'.

She also attacked my statement that at the start of the year there were 1,994 Protestants on the waiting list in the North Belfast constituency and 1,988 Roman Catholics.  Those are the Housing Executive's own figures but because they weren't the sort of figures she wanted she rejected them.  Here again it is a case of  'never let the facts get in the way of Sinn Fein propaganda'.  For years they have talked about waiting lists and then when the real truth about waiting lists is explained they want to ignore them and move the argument on to something else.

That is why the DUP has been repeating the real facts about social housing in North Belfast.

I debated this issue during the week with Alex Maskey on the Nolan Show on Radio Ulster.  I was able to present the facts about waiting lists and waiting times but he seemed to have no interest in the facts.  He simply wanted to keep on repeating the republican mantra of discrimination.  Nevertheless it was a great opportunity to disseminate the facts to a province-wide audience and to expose the false propaganda of the SDLP and Sinn Fein.

Then next Tuesday my DUP colleagues William Humphrey and Paula Bradley will speak in an adjournment debate at Stormont, tabled by the DUP, on social housing in North Belfast.  After the other North Belfast MLAs have spoken, I will be able to respond at the end of the debate.  I look forward very much to that debate and a further opportunity to nail some of the myths and lies.

Posted by Nelson McCausland MLA at 07:33