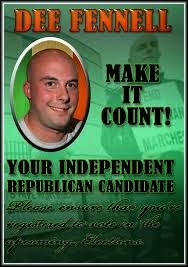 Last month Dee Fennell stood as an Independent Republican in the Oldpark DEA for the recent elections to Belfast City Council.
On his nomination form he gave his address as Duneden Park, which is in Ardoyne. However two years ago, when he appeared in court as Damien Fennell, in connection with his part in a protest organised by Greater Ardoyne Residents Collective, his address was given as Linden Gardens.
Now Linden Gardens lies between the Cliftonville Road and the Waterworks and it is well over a mile away from the Crumlin Road. So Damien or Dee certainly did not meet the requirements for membership of the Greater Ardoyne Residents Collective, as he was NOT a resident of Greater Ardoyne.

However this does illustrate something we already know, that GARC is not really about the rights of residents ... it is simply about giving verbal and violent expression to a crass sectarianism which will not tolerate Orangemen on the Crumlin Road.
Posted by Nelson McCausland MLA at 17:30