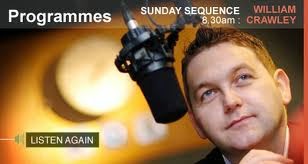 I don't listen to Sunday Sequence on Radio Ulster a regular basis but I did happen to hear a discussion this week about the Human Trafficking Bill, which is making its way through the Northern Ireland Assembly.  The bill has been promoted by Lord Morrow and deals primarily with human trafficking but it would also make it illegal to purchase sex from a prostitute.  This aspect of the bill was discussed on the programme under the title 'The ethics of prostitution'.
The discussion involved the presenter, William Crawley, and three women, Laura Lee, Julie Bindel and Harriet Long.

Laura Lee is a prostitute who lives in Scotland and is from an Irish Roman Catholic background.  She is a spokesperson for the International Union of Sex Workers.  She is opposed to the bill as she believes it interferes with her business as a prostitute.

Julie Bindel is an English writer, radical feminist and co-founder of Justice for Women.  She is a lesbian and refers to herself as a political lesbian feminist.  During the programme she also described herself as a secularist.  In January 2009 she wrote about the radical lesbian feminism of the 1970s and 1980s and ended with an invitation to heterosexual women to become lesbians!  Bindel supports the Human Trafficking Bill and believes it should be illegal for a man to purchase sex from a prostitute.

Harriet Long is also English but has been living in Belfast for some years and is an advocacy officer for the Rainbow Project in Belfast, a homosexual, bisexual and transgender organisation.   She was described on the programme as being 'from a Christian background' and was formerly a youth worker with the East Belfast Methodist Mission.  On her blog she identifies herself as a feminist and says that she 'lurks around the congregation and leadership council of the East Belfast Mission'.  Harriet Long is opposed to the Human Trafficking Bill.

It was not altogether surprising that the prostitute opposed the bill and the core of the discussion was really between the gay rights activist, Harriet Long, and the radical gay feminist, Julie Bindel.

Harriet described Northern Ireland as 'religiously, socially and politically conservative' and  spoke of an 'evangelical crusade' while William Crawley spoke of a 'new Puritanism'.  However there was no one there from an evangelical perspective to respond to those comments - so much then for the BBC's commitment to balance.
Sunday Sequence has been broadcast on Radio Ulster since 1980 and was originally presented as 'religious broadcasting' but in more recent years the religious content in the programme has been greatly reduced.

Oh and back to the discussion on the Human Trafficking Bill - a prostitute from Glasgow, an English radical feminist who is a lesbian and a secularist, and an advocacy worker from an organisation for homosexuals - perhaps someone in the BBC can explain how they came to select the panel.

Posted by Nelson McCausland MLA at 00:28