This is Councillor Gerry Carroll who has just been elected to the new shadow Belfast City Council to represent Blackmountain DEA in West Belfast.
He was elected as a member of the People Before Profit Alliance, which was described by Irish News columnist Newton Emerson as 'a wholly owned subsidiary of the Socialist Workers Party'.
Most people will not be familiar with Gerry Carroll or the PBPA or indeed the Socialist Workers Party, so it may be helpful to provide some background on these organisations and their new Belfast councillor. 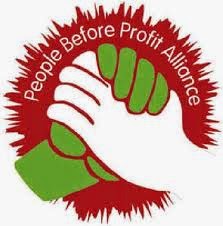 Two PBPA candidates were elected to the Dail in the Republic's 2011 general election.  They were Richard Boyd Barrett of the SWP and Joan Collins but in April 2013 Joan Collins left the Alliance to form United Left, a political party, with former Socialist Party TD Clare Daly.  The PBPA fielded 43 local government candidates in the Republic in May 2014 and gained 14 seats.

In June 2011 Gerry Carroll stood for People Before Profit in the West Belfast by-election that followed the departure of Gerry Adams and he gained 1,751 votes (7.6%).  He also stood in the 2011 Assembly election and took 1661 votes (4.8%).  Those two election campaigns provided the basis for his 2014 bid for Belfast City Council.

So much for the 'party' which is really a front for the Socialist Workers Party but what about Gerry Carroll himself.

Gerry Carroll was educated at St Mary's Christian Brothers Grammar School.  He has been a political activist for some years and he was arrested in December 2010 while taking part in a student protest against fees.  He was charged with committing a provocative act, resisting police and obstructing lawful activity in a public place and appeared in court on 5 January 2011.

A Facebook page relating to this case described Carroll as an 'SWP member and anti-cuts campaigner'.  So then what is the SWP?

The Socialist Workers Party can be traced back to 1950 when it was founded as the Socialist Review Group by Tony Cliff (1917-2000).  This tiny group of Trotskyists adopted a strategy of 'entryism' in the Labour Party in order to reach a wider audience and recruit new members.  It became the International Socialism Group at the end of 1962 and around 1965 it abandoned the strategy of 'entryism'.  According to the group's historian Ian Birchall, the position of the International Socialists was one of 'unconditional support for the IRA in the struggle against imperialism'.  In 1977 the group was renamed the Socialist Workers Party.

Meanwhile in Ireland the Socialist Workers Movement was formed in 1971 by members of the International Socialists who were living in Ireland and who had previously been members of the People's Democracy and several other minor groups.  The SWM argued that it was the duty of revolutionary socialists to support republicans in fighting against 'British imperialism'.  They supported IRA prisoners and some of their members were active in anti-H Black committees.  The SWM also encouraged people to vote for Sinn Fein.

At its conference in 1995 the SWM was renamed the Socialist Workers Party and it argued that the Sinn Fein leaders were moving to an accommodation with imperialism.  It was time for them to strike out on their own and in 1997 the SWP began contesting elections in the Irish Republic.

On 25 February 2006 there were riots in Dublin against a planned 'Love Ulster' parade and the SWP issued a statement in which it expressed full support for the actions of the republican rioters - 'Socialists do not join in the condemnation of young working class people who riot against the police - especially given the wider context'.

In Northern Ireland from 2003 to 2008 the SWP operated as part of the Socialist Environmental Alliance, which was led by Goretti Horgan, the partner of Eamonn McCann.  However the SEA dissolved in 2008 and the SWP now operates under the banner of the People Before Profit Alliance.

Gerry Carroll was elected with the votes of a hard core of votes from Trotskyists and others on the far-left but he also got the votes of some middle-class nationalists who were disillusioned with Sinn Fein and the SDLP, particularly over issues such as Casement Park.  They were not going to vote for a dissident republican candidate but they felt able to vote for Carroll.  In time they will be able to decide whether they made a wise choice.
Posted by Nelson McCausland MLA at 00:17