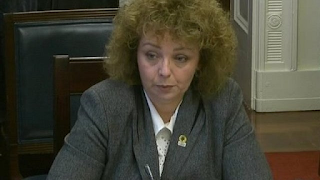 Over the past few weeks there has been considerable controversy around the decision by the Culture, Arts and Leisure Minister, Caral Ni Chuilin, to remove money that had already been allocated by the Arts Council to thirty-two arts organisations and then direct much of that money to projects of her own choosing.

The fact that the money had been withdraw by the minister and then reallocated by her has been well publicised but I think that many people in the arts sector and beyond find it very hard to understand exactly what has happened, why it happened and how it happened.

Very often the minister puts the blame on 'austerity cuts' and 'Tory cuts' and she said it again this week in the North Belfast News (14 November) - 'As a result of Tory cuts I had to find £1.9 million of reductions within my department.'  However that is simply untrue.  It is a Sinn Fein smokescreen designed to divert attention away from the real facts and the real story.  They are Sinn Fein cuts, imposed by a Sinn Fein minister in one area to free up money that she can then reallocate to other things.  In fact she has already told us where the money has been reallocated.

The minister appeared before the Assembly's Culture, Arts and Leisure Committee on Thursday 5 November and then on Thursday 12 November the committee held an event in the Metropolitan Arts Centre at which the organisations affected by her most recent decision were able to set out for us the impact of what she has done.

Several of the participants highlighted the fact that this was not so much a cut to the arts as a reallocation or redistribution of money by the minister.  She has, in effect, overruled the Arts Council, which is the body officially tasked with distributing money to the sector.

However the finances of her department are very difficult to understand because of the way that she operates and so I propose to write a post or series of posts in which I set out the facts.  It is too long for my column in the Belfast Telegraph, which is limited to 650 words, and this blog is the easiest way to get the information out.
Posted by Nelson McCausland MLA at 08:34