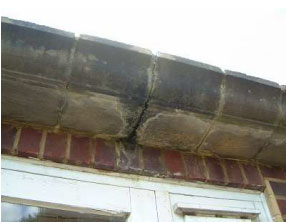 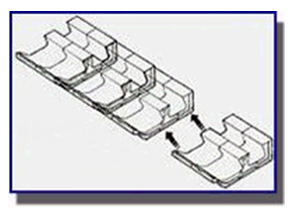 For many years there have been problems with dampness and mould in some of the houses in Silverstream and Tyndale.  It is an issue I have written to the Housing Executive about many times and they have generally come back with the answer that it was a problem of condensation.

I was convinced that this was not the case and kept pressing them on it.  In the worst cases they dry-lined some of the walls but in the end the dampness usually came back after a period of time.

These houses were built with Finlock gutters, solid concrete gutters, which fit together as in the picture above.  This system was used in several estates in Northern Ireland back in the 1950s and 1960s and also in estates across the United Kingdom.  Over time they deteriorate and water starts to penetrate into the walls.  That is the source of the problem.

The only permanent solution is to have the external part of the concrete gutters cut away and replaced with a more suitable guttering system.


Having got the Housing Executive to admit the cause of the problem the next thing was to get them to address it and they carried out a pilot on two houses in Silverstream.  This involved sawing off the old concrete gutters and replacing them with ordinary gutters.  However the work involves more than that as the roof has to be extended down somewhat.

The work on the two houses was very successful and replicates the sort of work that has been done in estates elsewhere in Great Britain.  Now that they had the answer the next thing was to get them to carry out the work across the estate.

I argued that they should just go in and do the work on all the houses because where you have two houses or a row of houses, you can't saw off the old gutters on one here and one there - you have to do the whole row.  So what are they to do where they own some some of the houses in the row but not all.

I warned that this becomes very complicated as different people in the same block will be in different situations and some will be entitled to grants while others may not.  However time was pressing on and in order to get the work started they have broken it down into phases.

The first phase is where all the houses in a block or a pair of semis are owned by the Housing Executive and there is no issue.  Those houses will be in the first phase and while that work is going on the Housing Executive will find out who is entitled to a grant and who is not.  They will then consider how to deal with the situation that emerges.

It is certainly not an ideal situation and we will meet the Housing Executive in a few weeks to see what they have found and we will keep pressing the point that the only way to upgrade the stock properly is to do all the houses.

This much is clear:
What remains is to convince them that should simply do the entire scheme with the remedial work offered to home owners as well as other residents, free of charge.

That would remove the need for processing grant forms and ensure that work can be done to all the Housing Executive houses.  I do not understand how they will be able to deal with the blocks that have some private owners unless they go in and do them all.

At the end of the day someone will hold out and refuse to pay for new gutters on their own house.  What will the Housing Executive do then?  Leave their tenant in the middle of the row with the old Finlock gutters - they can't do that - and yet they can't fix that house without fixing the houses beside it.

The work will start with phase one and in the meantime, while that is being done, we will continue to argue for all the residents that they should all have the work done without the need to apply for grants.

If the Housing Executive had admitted the cause of the problem some years ago, and put it right at that time, some at least of the home owners would have been buying a house that already had the work done.

Someone from the Housing Executive is going door to door about this to talk to residents but if you have a particular concern and want to speak to me about it please contact my office and make an appointment to see me.

Posted by Nelson McCausland MLA at 14:33