Earlier today there was a report on the news of an incident at Flush Place in Lurgan.  The name took my attention because last week I was speaking to some folk about Ulster-Scots place-names in North Belfast and in particular the Flush Road and the Flush River.  I also mentioned that in West Belfast there is a Flush Bend on the Springfield Road. and there is also a Flush River.

The word flush is found in Scots and Ulster-Scots and the Dictionary of the Scots Language explains it as:

A piece of boggy ground, esp one where water frequently lies on the surface, a swampy place, a pool of water in a field.

The DSL only provides historical examples of its usage in Scotland and there are no examples from Ulster but we can see plenty of examples in Ulster with its use in place-names.

It appears in place-names in various parts of Ulster and at one time there was a Flush Hall at the bottom of Scrabo Hill in Newtownards, where Scrabo estate now stands.  Apparently it was the scene of a famous murder in 1915. 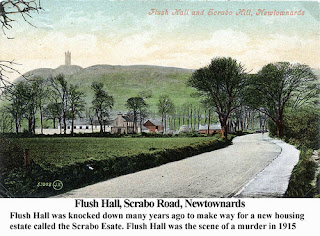 I also came across a Flush Road near Moneyslane, a Flush Park in South Belfast and another Flush Park at Knockmore in Lisburn.

Posted by Nelson McCausland MLA at 09:42