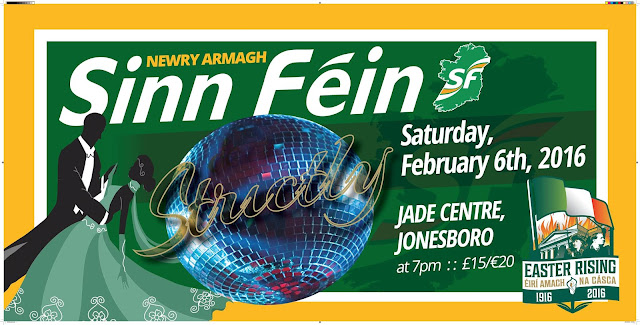 The recent Sinn Fein version of 'Strictly Come Dancing' attracted a lot of attention ... and even more ridicule.  It even had its own dedicated Facebook page, which was hosted by Mickey Brady MP.  As well as hosting it he posted on it and one of his posts was about the official launch of this Sinn Fein event.

15 January at 08:52 ·
Sinn Féin Does Strictly will be officially launched tonight in Dromintee GAA Club at 7.30pm. Music, dancing and refreshments will be available so feel free to come along and get a taster of what's in store on February 6th!
20 Likes3 Shares


This was clearly a party political event, organised by Newry & Armagh Sinn Fein, and the promotional video, which featured several Sinn Fein politicians, explicitly linked the competition to the forthcoming elections in Northern Ireland and the Irish Republic.  Yet it was launched in Dromintee GAA Club.

That official launch in the GAA club was filmed and this became the basis for the promotional video which featured, as well as Sinn Fein politicians, another Sinn Fein figure who was identified as Sean Hughes but is generally known as Sean 'The Surgeon' Hughes.

Now the GAA have stated that GAA premises should not be used for party political events so it seems that Dromintee have simply ignored the rules of their organisation.

Of course we shouldn't be surprised by that for the home of Domintee GAA Club is Pairc Ui Luachra agus Mhic Cathmhaoil.  This is the.Irish translation of Lochrie and Campbell Park for the grounds are named after two Provisional IRA terrorists, Jim Lochrie and Sean Campbell, who were killed when a land mine exploded prematurely at Kelly's Road, Killeen, on 6 December 1975.

The GAA speaks of 'reaching out to unionists' but any gestures in that direction are contradicted by situations such as that in Dromintee.

Posted by Nelson McCausland MLA at 02:39