Talkback and those FAI team shirts 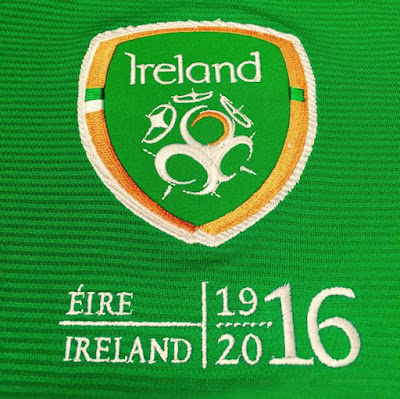 Yesterday morning I received a telephone call from the Radio Ulster programme Talkback.

They wanted me to on to discuss the fact that the Irish Republic's football team have shirts commemorating the 1916 Easter Rising.  The invitation came on the back of newspaper coverage of a statement I had issued on the matter.

I asked the woman who rang, who else would be on the programme with me and she said she didn't know.  I made the point that I would not be going on to discuss this with a 'commentator' or a nationalist politician. I explained that there was no point in going on if they could not get someone from the Football Association of Ireland and preferably their chief executive John Delaney.

She asked if I would debate it with someone from the football world in the Republic but I pressed the point that it had to be someone from the FAI.  They are responsible for the team and for the choice of a team kit commemorating the 1916 Easter rebellion.

A short time later she rang back to say that the FAI had declined to put up a spokesperson for Talkback, so I said that I wouldn't take part in the programme.

I would have been keen to confront John Delaney on the programme because it would have been an opportunity to discuss 1916 team shirt with the chief executive of the organisation that chose it.

It would also have been an opportunity to discuss the statement he once made about their team singing rebel songs on the team bus.  Indeed he himself was once recorded in a Dublin bar singing a song about a member of the Provisional IRA.  So it is probably not surprising that the FAI didn't put up a spokesman.

But this raises a wider issue about Talkback and similar programmes.  They let certain organisations and individuals off the hook.

Some time ago there was a controversy about Carrick Hill republican Frank 'Dipper' Dempsey.  I was invited into the Radio Ulster studio but Dempsey went AWOL and they said they couldn't contact him.  In that way Dempsey was able to avoid scrutiny and he was allowed to avoid it.

I'm rather tired of being brought on to programmes and then set against a nationalist politician or a 'commentator'.  It allows Radio Ulster to have a lively debate but it reinforces a public perception of constant political bickering and allows people like John Delaney and Frank 'Dipper' Dempsey off the hook.

Posted by Nelson McCausland MLA at 20:00